When ‘Follow the Leader’ Takes an Absurd Twist – Series, Part I

It occurs to me that 2020 has provided us with an unprecedented number of opportunities to apply the term, “unprecedented.” That may be an impressive achievement, but it isn’t particularly encouraging, since the term seems to be most often applied as a negative descriptor. In any case, in contemplating the events that have led us to where we are today, the word comes to mind a lot.

Absurdity Undetected ~
For instance, “unprecedented” would be suitable in referring to the number of ideas and proposals being given serious attention in 2020 that are pragmatically absurd. It seems incomprehensible

that so many appear to be unable to recognize the absurdity and see the tragic implications of some of the things they support. That disturbing trend involves the same kind of unique blindness that Jesus encountered, and He confronted it by applying absurdity itself as a teaching tool. His message was, as always, masterfully delivered, and the lessons encapsulated in it are desperately needed today.

Israel was a conquered and occupied territory in Jesus’ day. There was a continual struggle over whose approach to adopt and whose leadership to follow–sound familiar? That quandary was especially intense when it came to religious authority and spiritual truth. The group getting the most attention and occupying the most prestigious positions in the ranks of religious leadership were the Pharisees. Until the upstart Rabbi from Nazareth came along, Pharisees were rarely, if ever, challenged about anything, especially when it came to the interpretation and application of Mosaic Law.

A Prestigious Group ~
In those days, contact with Pharisees in Israel was practically unavoidable, especially around Jerusalem. They were impressive and influential public figures, parading around in robes designed to advertise their religious affiliation and gathering crowds to listen as they prayed lengthy and eloquent prayers and to watch as they presented their offerings with ostentatious theatrical flair. In spite of the fact that they concocted burdensome ordinances that they themselves ignored, people followed them around hoping to learn what they had to do in order to earn God’s favor. Jesus had some special instructions for His followers about how to deal with them and an interesting opinion about their role.

Like so much of His teaching, Jesus’ abrupt-sounding admonition regarding the Pharisees was expressed in simple, unambiguous terms. The clarifying elaboration that followed was also direct and uncomplicated, but Jesus added a tone of uncharacteristic sarcasm. The Pharisees claimed to have understanding of Mosaic Law and religious authority that Jesus knew to be fraudulent and spiritually toxic. He wanted no misunderstanding about that among His followers and to ensure that the message was clear, Jesus described the Pharisees and their role in a unique way. He employed an analogy that represented a classic illustration of abject absurdity. Regarding the Pharisees, He said with captivating brevity:

”Let them alone: they be blind leaders of the blind. And if the blind lead the blind, both shall fall into the ditch. Matt. 15:14 (NKJV)

An Absurd Situation ~
The directive to “let them alone” didn’t require a lot of detailed explanation. They were not to involve themselves with the Pharisees in any way. What grabs the mind in Jesus’ comment is His description of what the Pharisees represented. He called them “blind

leaders of the blind.” A more absurd situation could hardly be imagined, yet it was going on around them every day, and unfortunately, the bizarre practice continues to exist today.

A few principles are immediately apparent, beginning with the fact that in the ‘physical’ realm, blind people should never lead because, well… they’re blind. They’re not equipped to choose a safe and appropriate path for themselves, much less to give trustworthy direction to others. And that obvious conclusion unveils a secondary one. Since blind people are categorically unqualified to lead, it follows that leadership should be reserved to people who can at least see where they’re going. Finally, given that sighted people are the only ones qualified and equipped to lead those who cannot see, it’s clear that the gift of sight itself brings with it a moral responsibility. If those who can see refuse the guidance they could easily provide, then it leaves those who are blind with only two options. They can stumble along as best they can on their own, or engage in the disastrous absurdity of following one as blind as they are. It is a tragic act of cruel insensitivity for sighted people to refuse to lead those that are blind.

A Physical Image with Spiritual Implications ~
Obviously, Jesus did, and does, care deeply about the plight of those who are unable to see. The fact that He restored sight for so many who were blind provides irrefutable evidence of that, but His concern in this case was not about physical eyesight. His comment about

blindness regarding the Pharisees is metaphorical. He was addressing their spiritual blindness. It was a condition that posed a much greater threat then, and it is the issue of greatest concern today. A complicating factor common with spiritual blindness is that, unlike physical blindness, it is not always so easily discernible. As we’ve seen with the viral plague currently gripping our nation, those who are affected by it may not know they have it. Consider this exchange between Jesus and a group of Pharisees in the aftermath of His having healed a man who was born blind. Note the concluding question they asked.

And Jesus said, “For judgment I have come into this world, that those who do not see may see, and that those who see may be made blind.” Then some of the Pharisees who were with Him heard these words, and said to Him, “Are we blind also?” John 9:39-40 (NKJV)

The tragic paradox of being blind and not knowing it is mentioned again in John’s prophetic message to the Laodicean church:

Because you say, ‘I am rich, have become wealthy, and have need of nothing’–and do not know that you are wretched, miserable, poor, blind, and naked. Revelation 3:17 (NKJV)

Spiritual blindness is a condition that will doom people and nations to a future without hope unless an intervention is introduced that has the power to change it, and that is precisely what Jesus declared that He came to do.

Then Jesus spoke to them again, saying, “I am the light of the world. He who follows Me shall not walk in darkness, but have the light of life.” John 8:12 (NKJV)

When “follow the leader” takes an absurd twist and blinded followers hang onto leaders who can’t see, disastrous results are unavoidable. Jesus committed the work of giving sight to the spiritually blind to those whose eyes He has opened. Providing light and leadership is our job, but it would be sinfully presumptuous to offer guidance to others if we have not examined our own vision first. We must be sure that we know the way home before offering to tell others how to get there. 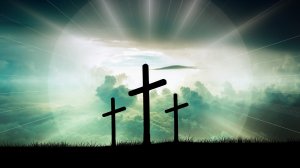 We will continue to explore the issue of spiritual blindness and its impact in upcoming posts, but we must begin by opening our own eyes and renewing our commitment to carrying out the vital role we were given as followers of Jesus.

2 Responses to When ‘Follow the Leader’ Takes an Absurd Twist – Series, Part I