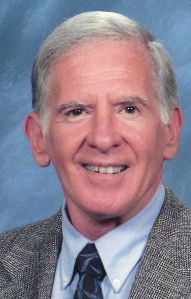 While Ron’s career has spanned a broad scope of titles and job descriptions from ministry to behavioral health to theological curriculum development, the primary focus of his life now is to be another stabilizing voice in a culture awash in a tsunami of moral and ethical confusion. Gallagher’s Pen offers fresh insights each week aimed at viewing culturally relevant issues through the lens of Biblical truth. He also publishes a weekly newspaper column, contributes regularly to Refresh Bible Study Magazine has contributed to Broken but Priceless: The Magazine and Bible Advocate. He has recently been invited to become a regular contributor to SoCal Christian Voice, with his first article having been published there on March 7, 2018.  In addition to his writing ministries, Ron also serves as a church consultant and featured speaker.

Ron has been writing since he was a teenager and is quick to point out that he clearly lacks the capacity to “refrain” from the practice. Writing and some form of public speaking, both of which are characterized by a rather unique sense of humor, have been a part of virtually every position Ron has held. In spite of that, until the last few years, he had made no serious effort to publish or formally distribute anything he had written over all those years. That began to change in 2012 when he received an invitation to join a Christian writers’ group.

Ron has recently published a new book called Right Side Up Thinking ~ In an Upside Down World. As a master storyteller, he takes everyday occurrences, often interspersed with a unique style of humor, and weaves them into unforgettable spiritual insights. Whether addressing cultural conflict, hoverboards, “zombie” cockroaches, or Goldilocks like you’ve never seen her, he uses a wide range of down-to-earth illustrations to paint a picture of “right side up” thinking in an “upside down world.” The book ties closely into the stated purpose of his blog site and was subsequently — and aptly — named, using the tag line here on the Gallagher’s Pen site.

He also engages in other freelance writing in a variety of formats, addressing a number of topics and issues. Much of his writing and speaking is an outgrowth of his work in the area of forgiveness. He has been featured as a key speaker at Bible conferences both in Virginia and in Alaska, where he and his wife also lived and ministered for a number of years, and has led seminars over the years on a variety of Christian issues and Biblical topics.

After decades of exposure to people in crisis situations and in response to God’s direction in his life, Ron’s major publishing efforts are concentrated now on a project that will include a new book and a companion study guide that he’s calling “Reclaiming Eden ~ What to Do When Someone Shatters Your Dream.”  Related to this project , Ron had previously developed curriculum for a series called Forgiveness by the Book. The full series has been presented in several churches in the central Virginia area.

Ron’s undergraduate work was done at Liberty University in Lynchburg, Virginia. He holds advanced degrees in Education and Counseling from The College of William and Mary and from Liberty University. Ron is also a certified trainer in the area of small group dynamics and, specifically, for Focus on the Family’s “The Truth Project” worldview study, and Family Life’s “Marriage Oneness” series.

He is available for speaking engagements, leading small group training, and conducting Forgiveness by the Book presentations, as well as numerous other topics of interest for churches or other venues. For more information regarding his ministry offerings, click here or on the Events & Opportunities drop down menu for “Ron’s Ministry Offerings” and for other published works, click on the Publications tab and then the drop down menu.

Ron and his wife are native Virginians and he says that both of them are in many ways a product of Virginia’s rich history and spiritual heritage. Though he and Diane also lived, worked, and conducted ministries in Alaska for several years, Virginia has always been ‘home’. He declares that he was “born here, educated here, made the worst mistakes of my life here, and found the grace and forgiveness in Jesus Christ that counteracted all of that right here on Virginia soil” (and notes that no, he is not running for any kind of office and this isn’t the opening barrage of a campaign speech).

Right Side Up Thinking ~ In an Upside Down World …