Time to Leave the Grave Clothes in the Tomb

My personal conviction is that there aren’t any humanoid creatures living on Mars, or any other planet for that matter. I’m pretty sure, though, that if there are any out there, they’ve probably heard of the coronavirus by now and are aware that we earthlings are undergoing a major series of transitions because of it. They’ve likely heard through NASA’s health experts, the virus can live for a couple of millennia on the surface of flying saucers, asteroids, and space suits. So if any bald-headed little green men are lurking around out there, I hope they’re heeding the universal guidelines and aren’t zipping around the galaxy without their face masks and latex gloves on. And I’m sure they’re aware that no elective surgical experiments on abducted human beings is permitted until the restrictions have been lifted. There’s really no need to worry, though. If the coronavirus panic had reached Mars, they would have already invaded earth a month or two ago looking for toilet paper.

An Encouraging Reality ~
The forced transitions resulting from Covid-19 may not have reached Mars, but there aren’t many places on the inhabited earth that the pandemic hasn’t affected. Thankfully,

there are increasing reasons for encouragement. But the reality remains that in many areas of life, we’re going to see a major shifting of paradigms and an unavoidable rearranging of priorities. “Normal” will acquire new definitions and adapting to it will challenge us for some time to come.

That may not be the most pleasant topic on our minds right now, but there’s a contrasting reality that we need to recognize. Even transitions of the painfully undesirable variety can have unforeseen outcomes that are beneficial. Sometimes they unleash a wave of creative ingenuity that results in blessings that wouldn’t have emerged during times of ease and prosperity. The followers of Jesus have discovered that to be true again and again for the last two millennia.

Disrupting Messianic Expectations ~
Jesus has been disrupting the norm and initiating transitions since He arrived. Even those who were praying for the Messiah to come weren’t expecting anything like the One God

sent. The prophesied Son of David they envisioned would totally transform the nation. He would overthrow their Roman oppressors, create universal prosperity, and establish the Messianic Kingdom they had always heard about. Jesus didn’t fit that picture at all. The transition He offered was freedom from the bondage of personal sin, not some kind of deliverance from an oppressive political authority. We might do well to remember that at a time like this when so many are looking for a national resolution to be unveiled.

With so many of us facing changes we don’t want to make and struggling with transitions we don’t want to face, it might be an ideal time to shift our focus. There are positive transitions that God calls us to make that can improve life for us and those around us. The beloved Apostle John provides an interesting perspective on that process in his account of Jesus’ resurrection. Here’s what he had to say.

Something Left Behind ~
In the midst of all the tension and drama of the resurrection story, John tells us something that contradicts our excited proclamations about Jesus’ post-resurrection tomb being empty. Regarding its former human occupant, the statement is wonderfully and

profoundly true, but technically it wasn’t totally “empty”. Jesus’ grave clothes had been neatly folded and left behind. That bit of unsolicited information is both fascinating and challenging. Our resurrected Lord walked out of the tomb and began an eternal demonstration of what resurrection looks like. Though it isn’t specifically mentioned, we know that it wasn’t just His body that was made brand new and perfectly whole. He was also showing off a brand new wardrobe.

The resurrection transformation that Jesus experienced was not just for Him alone. It is extended for all who will believe Him and receive Him as Savior and Lord. Paul declared that those without Christ are already spiritually dead and hopeless, even though they’re physically alive, but Jesus invites all who believe to follow Him and share His resurrection. Paul pictures that transitional process of discarding old patterns and changing behaviors, like taking off an old garment and putting on a new one. He said it like this:

And you He made alive, who were dead in trespasses and sins. Ephesians 2:1 (NKJV)

But now you yourselves are to put off all these: anger, wrath, malice, blasphemy, filthy language out of your mouth. Do not lie to one another, since you have put off the old man with his deeds, and have put on the new man who is renewed in knowledge according to the image of Him who created him, Colossians 3:8-10 (NKJV)

Attitudes and behaviors are the external things people see about us, and like the clothing

we wear, they are often the first things they notice. When we regularly practice things that God condemns, any claim we make of having a part in the resurrection of Jesus rings hollow and hypocritical. The new life Jesus offers has no place for things associated with death and decay.

Jesus’ grave clothes remained as a testimony of the most profound and eternal transition that can be imagined. Soon after He left the tomb, those who loved Him were falling down and embracing His feet, but nobody suggested that He run back and get the grave clothes. Some things just don’t fit the new life that Jesus offers. 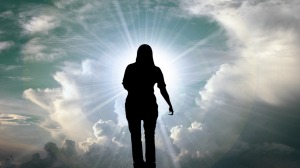 Maybe this time when we’re facing unavoidable transitions is a good time to make some positive changes on purpose. Maybe it’s a good time to take an honest look to see if we’re sporting behavioral “garments” that belong in the tomb. Maybe this is the time to abandon fear and dread, and embrace a new day full of optimism and hope, a time to determine that our faith in Jesus Christ is going to be more than just words. Maybe this is the time to leave our grave clothes in the tomb and come out of this plague demonstrating a power that disease and death can’t overcome and that governments can’t decree. Wouldn’t that look a whole lot like the spiritual revival that we desperately need?

Check out Ron’s book, “Right Side Up Thinking in an Upside Down World ~ Looking at the World through the Lens of Biblical Truth”.