God’s Plea Deal ~ Only Offered to the Guilty

For some time now, most of our mainstream newsrooms and media studios have looked like an ongoing “reality TV” series featuring daily episodes of anti-Trump convulsions. Lately, the guilty verdict in the trial of one of the President’s former associates and the plea-bargain based on an admission of guilt by another have added an almost gleeful quality to their tirades. The airwaves are reverberating with another coordinated effort to project their carefully scripted and dramatized reactions into every TV, laptop, tablet, and smart phone in the land. Welcome to another week in the “Propaganda vs. Truth” wars of 2018 America.

Since the issue of guilt is at the epicenter of the media’s current demonstration of the “art of manipulation by repetition,” and since so many are either salivating or agonizing over the impact of guilty verdicts, it seems appropriate to weigh in here as well. Multitudes are frantically declaring their view of the political implications, so let’s leave that to them and take a

different approach. Truth is, the whole concept of justice by a system of laws, including the role that guilt plays, was designed by God. So, let’s attempt to pull the subject out of its current political framework and take a “right side up” look at it through the lens of God’s truth.

A Personal Invitation ~
Let me illustrate by sharing my first personal encounter with a guilty verdict. I was 16 years old and discovered first-hand that taking a nap while driving a car was not only dangerous, it was also illegal. I had fallen asleep on my way home after taking in a late night drive-in movie and wrecked my step-dad’s car, a disastrous episode that granted me a personal invitation to the County Courthouse. 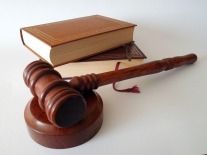 I sat there among the other criminals as the judge came in wearing a big black robe. He looked like Dracula, and I don’t think I could have been more terrified if I had seen fangs hanging out over his lower lip. The perpetrator tried just ahead of me got a guilty verdict and armed deputies took him off to jail–not an encouraging prelude. When the judge called me up, he used my whole name, which nobody did unless they were really mad at me. He looked down at me and said, “You’re charged with reckless driving resulting in an accident. How do you plead?”

Limited Options ~
There were lots of truthful responses that I could have offered. I could have said things like, “I plead scared half to death, Your Honor. And since you asked, I also plead profound regret, confusion, and anxiety. Oh … and since I skipped breakfast to get here on time, I plead kind of hungry, too.” But judges aren’t looking for a mental or emotional status report. I had one of two options, “guilty” or “not guilty.” It was a simple question. Did you do it, or not? My internal assessments were irrelevant. Note that guilt is a legal term, not a psychological diagnosis.

Establishing guilt is foundational to achieving “justice,” and there are some basic considerations worth mentioning here. Guilt is established at the moment of transgression whether justice is achieved or not. Justice is a matter of verifying that guilt has been accurately determined and the consequences have been assigned and executed in accordance with the demands of the law. When justice is achieved, it also declares that no further prosecution is allowed. Here’s how guilt and justice worked out in my case.

accused of doing. “Justice” would be achieved either by payment of a fine or jail time. Either one would satisfy the law and release me from any further consequences, but neither could erase the event or remove my guilt. There was no possibility of going back in time to secure innocence and absolve my guilt by “unwrecking” my step-dad’s car. My violation will forever be a part of the history of my life and nothing will ever change that. But the episode showed me how God designed justice with built-in hope.

I was guilty, but I didn’t go the courthouse alone. Even though it was his car that I ruined, my step-dad went with me and sat next to me through the whole process. He knew that I had no money, and before the judge came in, he reached for his wallet and handed me about twice what he thought the fine might be. I had nothing to offer, but the one I had damaged loved me in spite of what I had done and gave me more than enough to pay the fine. When I presented the money, the clerk didn’t ask me whose it was or where I got it. All the law cared about was that the fine was paid. I was just as guilty of breaking the law and wrecking that car as I was the moment it happened, but I walked out of that courthouse “free” because the penalty was paid in full. The law’s demand had been satisfied and justice had been done. I was still guilty but no condemnation remained. That’s what redemption looks like to God. That’s what being “justified” before Him looks like–guilty, but no longer condemned and forever free.

Inescapable Guilt ~
The popular culture attempts to escape God’s judgment by declaring that His Law never really existed, or that it no longer applies, or that its boundaries are merely suggested guidelines with no real penalties. The supreme Judge of the universe disagrees. He declared this verdict:

Now we know that whatever the law says, it says to those who are under the law, that every mouth may be stopped, and all the world may become guilty before God. Romans 3:19 (NKJV)

God’s verdict has been determined but His love offers one hope for redemption. Jesus Christ came to our side at the trial and paid the price we could not pay. Pontius Pilate declared in John 18:38, “I find no fault in Him at all…” but he condemned the guiltless One anyway. Jesus was innocent, but He accepted the consequences of our sins that the immutable Law of God demanded. He suffered a death apart from guilt that He might save us from the death that our guilt deserves.

The offer is before us, but it’s only for the guilty. If we acknowledge the truth and admit our guilt, Jesus provides more than enough to set us free forever. The Judge is waiting, so how do you plead?

Check out Ron’s new book, “Right Side Up Thinking in an Upside Down World ~ Looking at the World through the Lens of Biblical Truth.”