Someone once said that if you see a guy smiling calmly in the midst of a disaster he created, it’s because he’s already figured out who else he can blame it on. If that’s the case, my older brother must have had a happy childhood because his skill at using me to deflect blame would have made liberal politicians and some media people envious. He always seemed to find some way to make it look like I was the culprit–like that time he used my underwear to polish his Sunday shoes and then just sneaked them into the wash with the other white clothes hoping that Mom wouldn’t notice. 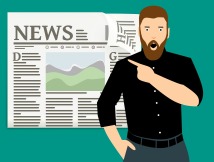 Trying to avoid responsibility by blaming others has been a natural tendency since the beginning, but it seems as though the process has grown to be a cultural characteristic in our day. Baseball used to be called “America’s national pastime,” but if a contest were held between baseball and “the blame game” to decide which one is more deserving of the title now, baseball wouldn’t have a prayer.

No Training Required ~
Blaming others is easy. It isn’t one of those behaviors that take years of practice and special coaching to learn to do, like mastering complicated classical compositions on the violin. Like other forms of selfishness and dishonesty, blame-shifting comes with the human condition, and like every other attitude and behavior that God identifies as sin, it is ultimately destructive and often the prelude to catastrophe.

As popular as blame-shifting is, you’d think that somewhere, somehow, someone would be heralding the practice as a positive thing. You’d think that someone would be declaring that their skill in diverting accountability, deflecting responsibility, and dumping consequences on someone else was an invaluable key to his or her success. As proficient as some public figures have become at it, it’s surprising that there isn’t a statue in some public square with the sculpted image of some notable politician figure proudly pointing a finger. It doesn’t seem fair that those who are so good at shifting blame to others never point out that skill on their resume. Curious, isn’t it?

Hiding the Truth ~
In the same way that movie stars are careful to hide all the deceptive tricks that make them look better than they really do and appear to perform in ways they really can’t, the

practiced blame-shifters never want their audience to see the whole picture. They use lies and deceit to divert any negative attention away from themselves and toward their victims, a tactic designed to protect their public persona from the truth and incite others to join in, amplifying the unjustified accusations and misplaced outrage.

Not surprisingly, God has some profoundly important guidance regarding this fundamental problem, and given our vulnerability to be drawn into it, maybe we ought to consider His perspective.

In the first place, blaming someone for the consequences of his or her actions only becomes problematic when we sidestep the truth, which is what the blame-shifters always seem to do. God has been in the business of intervening to correct that process ever since Adam tried to blame Eve for his disobedience. Accurately establishing where the blame belongs and firmly connecting the appropriate consequences to the person responsible is foundational to achieving justice. If the blaming process is flawed or misdirected, justice is hamstrung.

Our natural tendency to try to look better, feel better, sidestep a problem, or advance ourselves by denying the truth has potential not only to corrupt our lives here and now,

but to adversely affect our eternal future. We will never be capable in this life of delivering optimum performance all the time and in every circumstance. Failure is unavoidable. Blaming someone else when we fail does not alter what we did or failed to do, regardless of how successful our deception might seem. Getting the blame question settled accurately is not only vital to achieving a just outcome here and now, but it is vital to our eternal security.

Here’s how the process looks from God’s standpoint:

Now we know that whatever the law says, it says to those who are under the law, that every mouth may be stopped, and all the world may become guilty before God. Therefore by the deeds of the law no flesh will be justified in His sight… (Romans 3:19-20 NKJV)

But God, who is rich in mercy, because of His great love with which He loved us, even when we were dead in trespasses, made us alive together with Christ (by grace you have been saved)… (Ephesians 2:4-5 NKJV)

There’s only one act of transferring blame that meets God’s approval. In Jesus Christ, God offers the most incredible blame-shifting escape imaginable, but He only transfers our sins to Jesus when we openly confess them and accept full responsibility.

Being accountable for our actions is not only foundational to justice, it is an indispensable key to accessing the redemption God offers in Jesus Christ.

Check out Ron’s new book, “Right Side Up Thinking in an Upside Down World ~ Looking at the World through the Lens of Biblical Truth.”

Author, Speaker, Bible Teacher, Humorist, Satirist, Blogger ... "Right Side Up Thinking ~ In an Upside Down World" For Ron's full bio, go to GallaghersPen.com/about/
View all posts by Ron Gallagher, Ed.S →
This entry was posted in Faith and Politics, Faith, Family, and Culture, Forgiveness, In the News, Insights, Right Side Up and tagged Don't Blame Me!, Forgiveness, Gallagher's Pen, Hey Don't Blame Me!, Ron Gallagher. Bookmark the permalink.

2 Responses to Hey, Don’t Blame Me!