This may be something you haven’t heard in a while—an actual piece of bona fide good news. We could all use some after a week that included threats of a North Korean nuclear holocaust, a bloody “radical left vs. radical right vs. anything-related-to-the-Civil-War” street fight in Charlottesville, and topped off with another deadly ISIS-directed terrorist attack in Spain. And if that wasn’t challenging enough, the “news” diet we’ve been asked to consume was served by the usual parade of frowning faux journalists clamoring to see who can air the most shocking video captioned with the most inflammatory Trump denunciation, coupled with the most paranoia-inducing prognosis for the future.

Refusing the “New Normal” ~
We’re going to resist this “new normal” and inject some good news. In light of all that prior conditioning, you might want to take a seat and prepare yourself before continuing. Close your eyes for a minute, prop your feet up, relax your facial muscles, and take a few deep breaths. After all, the shock of positive information carelessly thrown into the brain’s matrix of media-manufactured negativity without advance preparation could trigger some kind of neuromuscular spasm. You could end up with a weird-looking, involuntary twitch and folks would be tweeting about it behind your back – and we wouldn’t want that.

Ready? Okay, here it comes: “Scientists report that fewer people than ever in America are being struck and killed by lightning!” Wow—unvarnished good news! It makes you downright giddy, doesn’t it? Please feel free to pause and read that again if you like. Just don’t get carried away and gather a praise team to work on a new song yet, because good news isn’t allowed to survive very long in this culture.

I must remind you that it’s still 2017 America, Donald J. Trump is still President, and there is little tolerance afforded anything that seems to run counter to the pervasive doom and gloom filling the air these days. Good news can’t be allowed to just hang out there spreading unchallenged goodness when there are so many things to be worried, angry, paranoid, enraged, depressed, and filled with dread about. Left unrestrained, good news could dismantle the propaganda produced by those who own and run our major sources of information.

Resisting Good News ~
So, anything released into the public arena that smacks of “good news” must be confronted by appropriate qualifiers and disclaimers, lest it spawn a shift toward optimism and hope. Immediate application of oppositional viewpoints and disarming questions is standard. Take, for example, the disturbingly uplifting report we referenced about the decreased number of lightning fatalities. Questions like these might arise:

If that sounds idiotic, just put it in the context of a major network newscast, and it will seem as reasonable as everything else they suggest.

Manufactured Emotion, Choreographed Outrage ~
The America I once knew is being consumed in a firestorm of fear, manufactured hatred, and faux outrage violently demonstrated by “protesters” hired and trained by leftists who oppose anything related to traditional (Judeo-Christian) values and the rule of law. The riots are neither organic nor spontaneous, nor caused by individuals feeling personally offended by statues that most had never seen or paid any attention to anyway. We’re being manipulated and overcome by “news” that is designed to promote an agenda and that’s carefully insulated against objective truth and anything “good”, and the result is tragic.

I have a question. If slavery is so heinous to these people, and if all hints of its existence 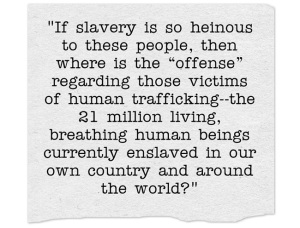 ought to be eliminated, then where is the “offense” and outrage targeting those victims of human trafficking that are enslaved here and now in support of the sex industry? Where are the demonstrations on behalf of the 21 million living, breathing human beings currently enslaved in our own country and around the world?

Slavery Worth Protesting ~
Working in a cotton field like their Civil War-era counterparts might seem a welcome relief for those whose bodies are sacrificed to service every kind of twisted, perverted, disgusting, and painful act of physical debauchery imaginable, imprisoned in a wasteland of lust and greed. Most were kidnapped as children, then bought and sold like cattle. If the outrage is really about slavery, then where are the enraged “protesters” storming the studios and distribution hubs where an endless stream of pornographic filth is produced and distributed daily? Where are the graphic tweets, and where are the banks of news agency cameras and hyperventilating reporters decrying that brand of slavery?

Until we get energized enough to emancipate some real slaves, let’s abandon our hypocritical 200-year-old grief. And then, how about using this current spread of anarchy in our land as another painful, graphic reminder. We’ve allowed the only “Good News” that has the power to free others to be chained by our fear of rejection and left languishing in the dark basements of our sanctified ecclesiastical prisons, and it’s time we set it free again.

Unshackled “Good News”:  Freedom’s Foundation – Freedom’s Legacy ~
We inherited a nation that declared itself to be “one” and “under God”—two vital designations that are inexorably linked. Today, America is functionally neither, because it cannot be one without the other. We have failed miserably in our responsibility to preserve that once-revered designation and cannot pray and sing our way out of that realization, but fixing blame solves nothing. The “Good News” has always been met with opposition, but it made its way from Jerusalem to this great land because those entrusted with it, some of whom were slaves themselves, refused to allow it to be shackled. A free Gospel built a free America – and remains its only hope today.

Author, Speaker, Bible Teacher, Humorist, Satirist, Blogger ... "Right Side Up Thinking ~ In an Upside Down World" For Ron's full bio, go to GallaghersPen.com/about/
View all posts by Ron Gallagher, Ed.S →
This entry was posted in Faith and Politics, Faith, Family, and Culture, In the News, Insights, Wake Up Calls and tagged Civil War, Freedom, The Good News. Bookmark the permalink.

4 Responses to Slavery Worth Protesting!