A Biased Look at Good News

Last week I indulged in a little sarcasm directed toward what appears to be an obsessive tendency in the media these days to suppress, deny, avoid, or challenge information that most of us would classify as “good news”. That trend has some important implications for all of us who consider ourselves to be followers of Jesus because dealing with “good news” is what we’re sent to do. In light of that, we might ask how news gets classified. Who is it, exactly, who gets to decide whether news is “good” or not?

In our current culture, a story often makes it into the “good news” category because of its warmth and uplifting emotional appeal. That’s why those animal rescue stories get air time even on the liberal networks that appear to have “good news” filters as standard equipment in their studios. Animal stories are just hard not to love, aren’t they?

Love Those Animal Stories ~
Watching them in the news is like seeing an entire Hallmark Channel movie get scrunched into a 45-second video blurb. Some innocent little (or not so little) creature gets trapped in some awful situation and then a selfless, heretofore unknown public servant leaps into action with no apparent concern for personal safety and with heroic disregard for the hot coffee and fresh box of warm Krispy Kreme donuts left unattended back at the firehouse. They wade into whatever mess the creature got itself into and wrestle past every obstacle with fearless determination until they’re able to carry (or drag) the pathetic victim to safety. Queue the tears, pass the Kleenex, and feel the love.

But what if the story takes a turn we didn’t like? Does it lose its “good news” designation 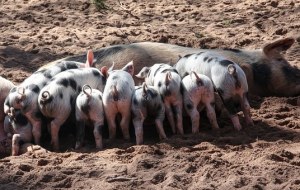 because it feels different? Consider, for instance, the report I saw recently chronicling a daring rescue of some pigs from a burning barn. A courageous group of firefighters apparently braved the flames to bring a bunch of pigs, including a litter of little piglets, out to safety. Definitely “good news” so far—get the Kleenex ready.

An Unanticipated Twist ~
The story goes on to report that at a later point, the grateful farmer who owned the pigs showed up at the firehouse with part of them in an effort to express his gratitude to the heroic firefighters. The wonderful gift the farmer brought to the firemen was a bunch of sausages made from the pigs they bravely drug out of the fire. I guess you won’t be needing those tissues after all. The “warm fuzzies” sort of dissipated, didn’t they?

The point here is that the “goodness” of “news” shared is often a matter of perspective. Responses to this news item, and perhaps any news item, depend on the meaning attributed to it by those who hear or read about it. Hearing that his pigs were rescued was remarkably good news to the farmer, but maybe for different reasons. It was not “good news” because the firemen had saved his pets—it was because they had saved his pork.

So, who gets to decide in this instance whether the news about the rescued pigs is “good” or not? Is it the firemen who saved them? Is it the group of bystanders looking on? Is it the reporters who talk or write about it? Is it some PETA fanatic who says things like, “Pigs are people, too.” Perhaps the best answer lies in another question, “Who has the most invested, and to whom does the status of the pigs matter most?” Maybe the “good” in the news feels best to the guy who sees them as his only means of providing for his family. Maybe the “good” feels best to him because pigs are an economic necessity, not some kind of symbolic political statement.

Perspective Changes Everything ~
Animal rights fanatics will never see the presentation of those sausages as a wonderfully touching display of gratitude and affection for those firefighters. But suppose the story ended differently. Suppose the farmer was like that guy in the old “Green Acres” sitcom who had that pet pig named Arnold.  Suppose instead of sausages, he showed up at the firehouse with the mother of the little piglets and said, “Hey guys, this is Henrietta. She’s my favorite sow and the best pig I ever had.  She’s real friendly and if the fire goes out on a cold winter night, you could cuddle up next to her and keep warm. I love this pig and would have lost her if it hadn’t been for you, so I’m going to let her visit with you guys for a whole month. You can take turns taking her for walks and sitting with her in the evening.  She grunts a lot when she’s dreaming, and sometimes her breath smells a little like fermenting turnips, but you get used to it after a while.” No doubt, the PETA folks would need some Kleenex if the story ended like that, right?

Jesus Himself showed us what we can expect when it comes to evaluating whether news is “good” or not. While multitudes considered His story to be the most wonderful thing they ever heard, others who heard the same information were enraged by it and plotted to kill Him. John reports one of those episodes this way:

“Then the Jews took up stones again to stone Him. Jesus answered them, ‘Many good works I have shown you from My Father. For which of those works do you stone Me?’ ” (John 10:31-32 NKJV)

“Good” is Personal ~
The awful story of the cross never looks like “good news” to everyone. The bystanders will always mock and the opponents will always gloat and hurl insults, but some will understand and believe. And for those who embrace its message of deliverance from sin, and who invest their heart and soul in its truth, no power on earth can diminish the “good” that it brings. That’s why wherever the Gospel has gone, “good” has followed. Our challenge is not to convince the world of its “goodness”, but to invest our lives in a consistent demonstration of it.

Author, Speaker, Bible Teacher, Humorist, Satirist, Blogger ... "Right Side Up Thinking ~ In an Upside Down World" For Ron's full bio, go to GallaghersPen.com/about/
View all posts by Ron Gallagher, Ed.S →
This entry was posted in Faith and Politics, In the News, Insights, Right Side Up and tagged Media Bias, The Good News. Bookmark the permalink.

4 Responses to A Biased Look at Good News