Addiction Rewired ~ from Heartache to Heaven

In last week’s post, Addiction—Hardwired for Heartache, our cat, Dusty, helped to briefly illustrate one facet of the pervasive plague of addiction, perhaps the most persistent, destructive, and costly epidemic our nation has ever faced. We mentioned that the obsessive pursuit of sin’s empty enticements, an identifying hallmark of addiction, does more than establish a repetitious pattern of behavior; it can also re-program the way our brains react to certain stimuli. Regarding that phenomenon, an article on genetics and the brain had this to say: 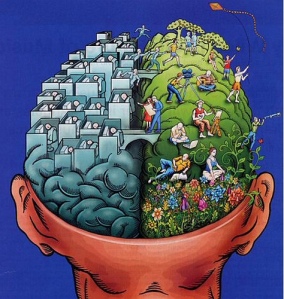 “As the brain continues to adapt to the presence of the drug [or its own chemical response to certain compulsive behaviors], regions outside of the reward pathway are also affected. Over time, brain regions responsible for judgment, decision-making, learning, and memory begin to physically change, making certain behaviors “hard-wired.” In some brain regions, connections between neurons are pruned back. In others, neurons form more connections. 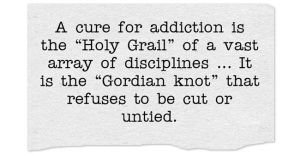 The search for a counteractive response to addiction that is safe, effective, dependable, and accessible has devoured untold volumes of time, money, and creative energy. A cure for addiction is the “Holy Grail” of a vast array of disciplines and continues to consume the careers of medical, psychological, sociological, academic, and religious researchers and practitioners. It is the “Gordian knot” that refuses to be cut or untied. The combined cost of addiction in America is said to be some 581 billion dollars per year, never mind the price paid in lost lives, fractured families, broken dreams, blighted neighborhoods, and blood flowing in our streets. Every year brings new strategies, new proposals, new programs, and endless demands for new money, yet the epidemic continues unabated.

In light of all that, is there anything of merit that the followers of Jesus have to contribute to the battle against this plague? Perhaps we could begin by acknowledging that the problem did not just arrive on the scene. Addiction isn’t some brand new, heretofore unseen “Frankenstein” that recently sprang to life amid the storm of modern creative chemistry, and it did not originate because powerful drug cartels took advantage of our insane immigration policies and lack of border security. And in spite of any claims made by Al Gore, we’re confident in declaring that addiction isn’t a social phenomenon caused by greenhouse gasses and global warming. Addiction has been around as long as we have, and it has been studied and observed in every context, circumstance, and laboratory imaginable. After generations of intense scrutiny and careful analysis, the apparent consensus is that it is too powerful to be constrained and too complex to be cured.

An Alternative Conclusion ~
But there’s another conclusion that the scientific world will never embrace; i.e., that

addiction at its core is nothing more than sin at work with focused intensity in a race whose nature is to engage in behaviors contradictory to its own welfare, and sometimes blatantly self-destructive. Some would see that statement as an extravagant over-simplification, but it is nonetheless true, and there is great hope in it. Addiction at its core is a sin issue, and sin is exactly what Jesus Christ came to this earth to confront and defeat.

Jesus didn’t just come to deliver sermons and theological lectures and to do things others can’t do. In the midst of a sinful world, He illustrated life the way God designed it to be lived. Again and again, He illustrated the importance of actually putting into practice the things God commanded and confronted those whose behavior contradicted their words.

The Final Test ~
The ultimate challenge of life is the actual living of it. It is what we actually do that finally determines the quality of our lives and the validity of our beliefs. No matter how we garnish our lofty ideals with eloquent rhetoric and erratic, transient emotional exhibitions, it all comes down to what we do in response to them that matters. Addiction is a matter of behaviors, not just ideas or personality traits. It is a predictable pattern of activities—things people actually do, and it serves as a graphic illustration of the challenge our beliefs present to our behavior, and vice versa.

Jesus illustrated the importance of behavioral responses in a story about a couple of guys who decided to build a house (Matthew 7:24-27). One began by establishing a foundation of stone. The other jumped right into the project and began to build on a bed of sand. The disastrous result was inevitable, and that builder was deemed a fool. The difference between the wise man and the fool in Jesus’ metaphor was not determined by personal qualities like intellect, skill, or talent. It was not about what they heard or learned; it was what they did in response to what they heard. My guess is that the builder who didn’t want to bother with a foundation regardless of eventual consequences had some addictive tendencies.

If repetitious engagement in behaviors that are personally self-defeating and socially toxic can result in a brain being “hardwired” to seek and/or demand more of them, what would happen if that same level of persistent repetition was applied to behaviors that were personally edifying and socially nourishing? Wouldn’t the brain’s capacity to adjust its “wiring” be just as responsive, only in a different direction? Sin has no more power to affect the neural pathways of our brains than righteousness does. Maybe that’s why Jesus continuously admonished us to put His words into practice.

God said, “Do not be overcome by evil, but overcome evil with good,” (Romans 12:21 NKJV). The more we reinforce our brains with the benefits that actually doing the things Jesus lived and taught, the more likely we are to overcome Satan’s deceptive lies and to develop a brain that’s “hardwired for Heaven”.

Author, Speaker, Bible Teacher, Humorist, Satirist, Blogger ... "Right Side Up Thinking ~ In an Upside Down World." For Ron's full bio, go to GallaghersPen.com/about/
View all posts by Ron Gallagher, Ed.S →
This entry was posted in Addictions ~ A Christian Perspective, Faith, Family, and Culture, In the News, Insights, Right Side Up, Series Topics, Wake Up Calls and tagged Addiction, Do not be overcome with evil, heaven, Sin. Bookmark the permalink.

2 Responses to Addiction Rewired ~ from Heartache to Heaven