Sometimes we find ourselves surrounded by a backwash of information regarding events that take over all the headlines and envelope every form of social media. I usually try to avoid those subjects. I don’t normally like writing about what everybody else with a keyboard who’s over 12 is writing about, but I’m going to sidestep that tendency today. Like so many others, I’ve been mentally abducted and coerced this week into reflections on the demise of the humorist/actor/celebrity/icon, Robin Williams. 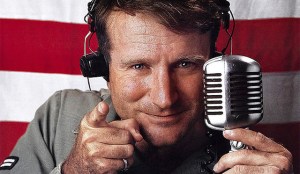 Let me quickly affirm that God is certainly not against humor, or humorists—at least not all of it, or them—for which I am personally very grateful, because I love to laugh. God said, “A merry heart does good, like medicine…” Proverbs 17:22a (NKJV). Laughter can be
one of the most uplifting and encouraging things we do. It can brighten otherwise dull and boring events and experiences. It promotes positive human contact, and can add a compelling and attractive quality to human interactions. Relationships that are void of humor tend to be less fulfilling and rewarding. The capacity of humor to counteract depression and despair is well documented and established—but the same God who promotes healthy and wholesome humor also warns us that laughter can also be an empty and pointless distraction. Solomon included that caveat this way, “There is a way that seems right to a man, but its end is the way of death. Even in laughter the heart may sorrow, and the end of mirth may be grief” Proverbs 14:12-13 (NKJV). And in an autobiographical comment, he said further,

“I said in my heart, ‘Come now, I will test you with mirth; therefore enjoy pleasure’; but surely, this also was vanity [emptiness]. I said of laughter–‘Madness!’; and of mirth, ‘What does it accomplish?’ “ Ecclesiastes 2:1-2 (NKJV)

Perhaps unknown to Russell Brand, he agrees with Solomon when, in writing about Williams in ‘The Guardian”, he said, “The chaotic clarity that lashed like an electric cable, that razzed and sparked with amoral, puckish wonder was in fact harvested madness.”

I’m sure that like most Americans, I laughed at lots of things that Robin Williams did and said in front of a camera. I don’t recall any of the details, though, because like all such experiences, those moments were a fleeting and inconsequential part of my life. Through no fault of Mr. Williams, and intending no diminishing reflection on his gifts and talents, the mirth of those moments passed and left nothing of enduring value. They were like eating a Twinkie—pleasant to the taste buds for a few seconds, but delivering no nutritional substance in the process. Or to employ another picture, like the passing of a boat on a lake—briefly marking its presence as the water moves aside to let it through, but leaving no trace of its path, no trail to follow, and no evidence of its destination. Mirth isn’t inherently bad—just characteristically empty.

On the other hand, I didn’t find ‘all’ of his material funny. Some of the stuff I was inadvertently exposed to was crude at best, and in some cases was—if I may use what has become an almost archaic term—just plain ‘dirty’. I guess we’re not supposed to criticize, though, because apparently such things are OK if you happen to be unusually quick-witted, and people find you funny. To rising stars and established celebrities, all kinds of behaviors become acceptable that for most of us would be socially unacceptable, degrading, morally repulsive, unethical, and even illegal. For the famous, wealthy, and privileged, or the ‘talented’ and ‘gifted’, things like that are not only overlooked, they are embraced and defended. In life, they are ignored, and in death, any critical references to them are softened or categorically disallowed. So it was—and is—for Robin Williams.

As is true of so many ‘successful’ Hollywood celebrities, there was no shortage of people who wanted to be like him. Well… on second thought, that’s not quite accurate, is it? More precisely, what they wanted was to have what he had. What we tend to covet is the recognition, the applause, the accolades, the money, the influence, and all the glitz, glamor, sex, and idol worship that goes with it. Those are the kinds of things Hollywood is always quick to display, and for the most part, those are the kinds of things we saw about Robin Williams—endless displays of what he had, and what he could do—not so much about what might be underneath all that.

Lusting after the sparkling and exciting externals is always easy, but nobody wants the emptiness that so often lives in its wake. Nobody wants the hidden and heartbreaking disappointment that attends the discovery that wealth and fame can’t produce what they promise. Nobody wants that insatiable crying internal vacuum that cannot be hushed or filled with all the stuff the world has to offer. Until the past few days, there was no shortage of people who would have lined up to have what Robin Williams had. But if the price to have what he had would have been to become who he really was, perhaps the line of people willing to make the trade would have been a lot shorter. Today, there’d be no line at all.

There have been many expressions of sorrow, many tears have been shed, and many prayers have been offered in response to the news about the tragic end of this gifted man. For him, they come way too late. Consider this. Perhaps Robin Williams paid an awful price to help us re-focus our attention. It has often been pointed out that humor is an effective mask behind which to hide our tears. If all of us were more willing and practiced at looking beyond the fleeting, inconsequential mirth dished out by the celebrated victims of Hollywood, things might actually end differently for some of them. Perhaps if we would offer our prayers and shed our tears for who they really are, even while they’re still feverishly trying to make us laugh at what they do, there would be fewer regrets to tweet about at the close of their last performance.

Author, Speaker, Bible Teacher, Humorist, Satirist, Blogger ... "Right Side Up Thinking ~ In an Upside Down World" For Ron's full bio, go to GallaghersPen.com/about/
View all posts by Ron Gallagher, Ed.S →
This entry was posted in In the News, Insights and tagged celebrities, Robin Williams. Bookmark the permalink.
<span>%d</span> bloggers like this: