Your Vote ~ The “Amen” That Really Matters

I was sitting in a Baptist church–not a place I was accustomed to be at that point, to say the least. I was a new follower of Jesus, but my moment of surrender and commitment to Him didn’t take place in the context of a church service, and it was largely unfamiliar territory to me. It wasn’t my first visit to a Baptist church, but it was the first time that I felt like I was somehow a part of who they were and what they did. It was a great feeling, and I relished in the sense of connectedness to these people sitting all around me. Then, someone leading a prayer closed it out by declaring, “And all God’s people said…” and just left it. I thought, “OK, I’m one of ‘God’s people’ now, and apparently all of us have something we’re supposed to say, but I have no idea what it is.” In that brief moment I felt left out somehow, because I desperately wanted to be included, and to say whatever it was “all God’s people” were supposed to say. My dilemma was short-lived, of course, because the answer reverberated around the room pretty quickly as a loud chorus of “Amen” filled the room.

A Wonderful Church Word ~
In spite of my minimal exposure to church in my early years, “amen” was a word I recognized. I learned about “amen” during those awful hours trapped on torturous wooden

seats between adults who seemed to derive some strange pleasure from inflicting pain on helpless kids. I discovered that just when the inescapable barrage of other church words being hurled at us was about to squeeze the last gasp of air right out of my lungs and alert the death angel to come to collect me, the last “amen” would finally show up. I loved “Amen.” It was a perfectly wonderful church word, because it brought the possibility that things were about to be over and we would finally be released. “Yes,” I thought . . . “Amen, Amen!”

So when I discovered that “amen” was the thing that “all God’s people” were to declare in unison, I was happy to comply even though at that point, I had no idea where the little ritual originated or what it meant. I’ve since learned that the “amen” reaction was a part of a procedure God commanded His people to observe as they entered the land He had promised to give them.

Then God declared this significant declaration:

Then Moses and the priests, the Levites, spoke to all Israel, saying, “Take heed and listen, O Israel: This day you have become the people of the LORD your God.” Deuteronomy 27:9 (NKJV)

An Interactive Public Declaration ~
The entrance of this unique people into the land God had promised them was marked by a ritual that was both visible and interactive. God had commanded that large stones be whitewashed for clarity and then adorned with His commandments written on them. As they passed by, tribal representatives would call out reminders of the curse that would be upon those who disobeyed and/or ignored God’s law, and their warnings would culminate with the phrase, “And all God’s people said…” The resounding response was an individual and collective, “Amen!”

would be characterized by the rule of law. There would be a national structure built on spiritual principles that were an expression of the very nature of the One who created them. These laws would form the basis for success in their individual, familial, civil, commercial, and spiritual relationships. Obedient application of them would provide for their personal safety and security, their national prominence and protection, and their spiritual/cultural wellbeing.

An Underlying Connection ~
The relevant point of all this right now is that we are confronted with America’s second most vital election in my lifetime, and perhaps in some ways, ever. There’s a valid correlation, I think, between America and the nation of Israel in the sense that we were

both established as nations characterized by a structure based on laws whose origin is God himself. In America we don’t have stones with God’s commandments written on them, but we have a Constitution whose principles can be clearly traced to those same roots.

God established the rule of law as a means of ensuring all that is beneficial to all of us, and He gave us the responsibility of preserving it. Failure to do that results in anarchy, the most destructive plague ever unleashed on any people. Anarchy unleashes everything that God declared would be a “curse” on His people. A vote for a Democrat in this specific election cycle at this time in our history, or a decision “not” to vote at all, equates to a vote to ignore, reinterpret, reject, or selectively apply basic laws that protect the structure that ensures our freedom and preserves our national integrity. 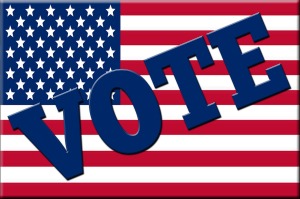 I believe that on Tuesday, November 6th, a call will go out, and a warning will be attendant with it. Those who believe that murdering innocent unborn children because they’re inconvenient want your support. Those who are in favor of erasing our laws when they don’t suit their political agenda or promote their quest for power want your support. It has become more than obvious that those who profit from and relish in the pain, loss, and chaos of anarchy are using every tactic in their perverted playbook to deceive us into granting them the power to run our country.

The time has come to do your part in responding to God’s call. The campaigns are basically over. The choices are clear. On Tuesday, we must affirm one side or the other, and there’s no middle ground. When Wednesday morning dawns and we discover what “all God’s people said,” may there be a thunderous “AMEN!” resounding across the land for God’s Truth and the principles upon which our beloved nation was built.

6 Responses to Your Vote ~ The “Amen” That Really Matters