Apparently a large segment of our population craves being scared half to death, and another large segment lives to make merchandise of them in some way. For both groups, October 2018 must be a really exciting time because a set of conditions is unfolding in America that equates to a “perfect storm” for the fear merchants and those who consume their wares. And like it or not, followers of Jesus aren’t offered a different set of conditions to live through, so taking a look at the fear options made available at this unique time would be beneficial for all of us.

The Usual Suspects ~
Folks who have become accustomed to a late-October dose of adrenaline can anticipate the usual annual parade of horror-related Halloween offerings. Every year, mad fashion

designers join ranks with demented make-up artists to produce a fresh wave of costumes depicting a multi-faceted view of death. There’s near-death, post-death, and sort-of (but not quite) dead, plus death that comes and goes. And lest we seem insensitive, efforts are made to acknowledge that monsters have nutritional needs, too. Therefore, among the undead, mostly dead, and occasionally dead, we have blood suckers, brain eaters, and an assortment of garden variety carnivores.

We wouldn’t want these impressively repulsive creatures to hang around the house on Halloween just to pass out chocolate to traumatized four-year-olds, so we’ve developed the ubiquitous adult Halloween party. But presenting such a party is not for the faint-of-heart. After all, no self-respecting thrill seeker would want to be caught dead, undead, or half-dead at an ordinary, run-of-the-mill Halloween party, and no party host wants to be denigrated on social media for having had the audacity to produce a party that didn’t include at least one fainting spell or urge to throw up, so there are options to prevent that. Parties can escape being thought of as ordinary by shifting the venue to a local theme park where a few adrenalin-pumping thrill rides will help ensure a coveted five-zombie rating. If that’s a bit of a stretch, adding one or two of Hollywood’s most gut-wrenching, panic-inducing cinematic nightmares to your party’s list of fun things to do should help make it a memorable event.

An Unbeatable Fear-Fest Finish ~
But if all those other gimmicks still leave your party plan feeling a little blasé, don’t despair, there’s hope. In addition to the Halloween season itself, there’s another monster creeping up on us that creates the “perfect storm” scenario mentioned earlier–the 2018

midterm elections. If nothing else you try seems to produce the level of panic you’re after for your Halloween gathering, turn off all your lights and force everyone to endure watching pre-recorded mainstream media’s news programs for the past couple of weeks. An appropriate follow-up might be a presentation of actual data and hard evidence on which party’s policies have produced exactly what kind of results, and what each one’s plans are for the future of our country. Then top off the evening by passing out coupons for discounted mental health therapy sessions to counter the cognitive dissonance that would probably result.

Obviously, I’m being a bit facetious regarding Halloween and the classic kinds of things related to it, but there’s nothing funny about the many sources of fear we’re confronting in our country right now. It would be great if our fears were relegated to scenes constructed by clever costuming, digital imaging, and fake blood, but that’s not the case and all of us know it. When it comes to personal safety and overall security, learning to identify things to be feared and how to deal with them effectively is vital. That is easily seen in a physical context, but it is nonetheless true on an emotional and spiritual plane, as well.

A Hallmark of Maturity ~
One of the basic milestones marking our journey from the helplessness and vulnerability of infancy to the status of a mature and responsible adult is our success in dealing with fear. As the scope of our experience broadens and our mental and emotional capacities increase, our ability to identify what constitutes a valid threat and to respond effectively changes. Making good decisions in the face of real or potential threats is a hallmark of maturity and a classic measurement of trustworthy leadership, and God has given us some guiding principles that are profoundly powerful and in great need right now.

In dealing with the question of who or what should be feared, Jesus suggested that a comparative threat assessment was in order and gave this example:

And I say to you, My friends, do not be afraid of those who kill the body, and after that have no more that they can do. But I will show you whom you should fear: Fear Him who, after He has killed, has power to cast into hell; yes, I say to you, fear Him! Luke 12:4-5 (NKJV)

These traumatic times in America have brought us into confrontation with life’s two most powerful motivational forces, our capacity to love and our capacity to fear. At no point in my lifetime has there been a greater need to make wise choices regarding which ones we allow to guide our thinking. John reminded us that:

An Explosion of Irrational Fear ~
In my opinion, the destructive force intended to be unleashed by those bombs mailed recently was never meant to kill people. If the bombs were intended to destroy anything, I think it was our freedom to engage in honest and open expression. If, instead of metallic shrapnel, they were designed to send an explosive wave of irrational fear tearing through the land in order to manipulate an election, then every bomb performed perfectly.

Irrational fear fosters panic, and panic makes sound judgment virtually impossible. To counteract both, God has given us His unfailing love, His unshakeable truth, and the 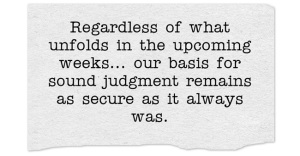 promise of His presence. Regardless of what unfolds in the upcoming weeks, in those incredible gifts, our basis for sound judgment remains as secure as it always was. The question, then, is not what scheme was conspired by whom to do what, but rather, what do we have that is real, what do we know that is true, what do we have that will last, and to whom do we owe everything? If we have those issues settled, then we can move ahead and make the choices that God directs with courage and confidence.