A Face-to-Face Meeting with the Enemy

We’re approaching Easter, that time of year when nature is coming back to life and our hearts and minds are occupied with optimistic and uplifting themes like resurrection and hope. Dealing with enemies is not a subject I had intended to address this week, but the prospect of long-standing enemies meeting face to face is interesting, newsworthy, intriguing, and always instructive. Two things happened this week that brought this issue into compelling focus for me. One was broad and international in scope, and the other was local, individual, and very personal.

We’ve all heard by now that there’s going to be a meeting at the highest level between two nations that have viewed each other as enemies for decades, and the media, not unexpectedly, has lapsed into a fresh wave of convulsions lately. That in itself is somewhat refreshing since what was once journalism in America, has been reduced to a pathetic circus with only a ringmaster shouting out empty hyperbole, while a bunch of tired elephants are dragged out and led around in the same circle every day. The meeting between President Trump and Kim Jung Un might actually, temporarily provide a different look for their act to break up the monotony

In any case, since the announcement was made, questions have been firing off like somebody attached one of those bump stock devices to every mouth in the press corps. Microphones have been shoved in the face of anyone remotely connected to Washington, DC, North Korea, or South Korea. Cameras have dogged anyone who has ever traveled to those places, or who happens to be related to someone who once lived there, or who claims to be able to actually find North Korea on a map. They ask penetrating questions like, “What does this meeting mean? Where and when will it take place? What will they say to each other? What kind of outcome can we expect? Is this a North Korean trick? How do North Koreans pronounce “dossier,” and to what extent might Russian collusion have been involved in this meeting?” And most importantly, “Is President Trump really going to sign Kim Jung Un up for “Jenny Craig”?”

It’s Different When It’s Personal ~
For most of us, this proposed meeting between enemies will have no direct impact. Even an event that appears to be historically significant can quickly slide into the realm of little more than a passing curiosity. That’s partly due to the fact that we don’t see the leader of

North Korea as a direct personal threat, at least not at this point. But I wonder what it would do to our level of concern about the outcome of this meeting if we knew that there was a weapon already targeting the city where we happen to live, and that it was capable of annihilating the entire population. But let’s make it even worse. Suppose there was a team of highly trained insurgents already dispatched with orders to take us out by any means necessary. Things change dramatically when a distant, generalized enemy gets up close and personal. When “an” enemy, or “the” enemy suddenly becomes “my” enemy, the issue is no longer merely academic, philosophical, or ideological. When we are the target in the crosshairs, enemies are deeply personal.

Another Face-to-Face ~
There was another face-to-face meeting arranged this week between a man and his long-standing enemy, but the media won’t be firing off any questions about that one. It was not on an international level and only known about beyond a relatively small circle of family and friends. His oppositional relationship with the enemy began in 1928, and their skirmishes went on all his life. Their warfare culminated in a final face-to-face meeting last Tuesday, and when we buried him on Friday, it may have looked on the surface like the enemy won, but there was another face-to-face meeting with his enemy that took place on his behalf a long time ago, and that meeting changed everything.

When God took human flesh and invaded this sin-cursed earth, it was not just to say some encouraging things, tell some memorable stories, and perform some remarkable deeds. He came to do battle with an enemy who is profoundly powerful, irrevocably committed to our ultimate destruction, and whom we could never defeat on our own. Jesus came to have a face-to-face meeting with him, and it was not to capitulate and try to negotiate a peace treaty with our mortal enemy. It was to annihilate him and his threat against us forever.

The Ultimate Battleground ~
We don’t always think about the cross of Jesus Christ as a battleground, but it was. It was a 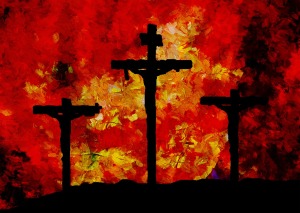 face-to-face confrontation between God and His eternal enemy, but its implications went beyond that. God made it a personal confrontation on behalf of those who would believe in Him. Thus He didn’t just face the enemy in a general sense, he faced our enemy.

That He was assailed with all the lethal force that sin could muster is profound, but that He was assailed with all the force that my sin could muster against me is profoundly personal. He met my enemy, and left him defeated, annihilated and forever stripped of any power against me. And just as His battle on the cross becomes personal, so does the empty tomb on Easter morning.

For as in Adam all die, even so in Christ all shall be made alive…. For He must reign till He has put all enemies under His feet… So when this corruptible has put on incorruption, and this mortal has put on immortality, then shall be brought to pass the saying that is written: “Death is swallowed up in victory.” 1 Corinthians 15:20-22, 26, 54 (NKJV)

Our Own Face-to-Face Meeting ~
Odds are that none of us will ever have a face-to-face meeting with the head of an enemy nation, but there’s an unavoidable face-to-face awaiting us with an enemy with much greater power. Because of his faith in Christ, my friend’s death was “swallowed up in victory.” But what about the one waiting for us? When the enemy meets us face to face, if the battle hasn’t already been won, it’s lost — forever.

My new book, “Right Side Up Thinking in an Upside Down World ~ Looking at the World through the Lens of Biblical Truth” has been released!