I wasn’t sure what to expect as she pulled the string over my thumb, wrapped it around my forefinger, and put the little hook thingy in my hand. Grandma was about to teach her five-year-old grandson how to crochet. It didn’t seem like a big deal at the time, and at least gave me something to do. I was intrigued by the idea of learning this curious looking process, and since Grandma was pretty good at it, I figured I’d be cranking out all kinds of fancy looking stuff by dinner time—not my only misconception about the art of crocheting.

Grandma stuck with it until I learned, an effort for which I have since forgiven her. After 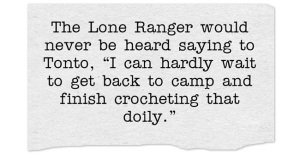 all, she only had boys to work with, and she had probably already taught us all the ‘guy’ stuff she knew by that time. It didn’t hit me till later that I had been subjected to such a disgustingly classic ‘girl thing’. I should have known even then that guys don’t invent names for things like, ‘doily’. The Lone Ranger would never be heard saying to Tonto, “I can hardly wait to get back to camp and finish crocheting that doily.”

Repentance Accomplished and Grandma Forgiven ~
In any case, I eventually repented for allowing that devastating assault on my budding masculinity and promised that from then on, I would only handle hooks that go on the end of fishing lines. I quietly slipped the painful episode into the category of things you never admit and sealed my newfound manliness by going outside, throwing a few rocks at a toad frog, and spitting on a couple of bugs.

I am violating my earlier vow not to divulge my breach of manhood for two reasons. In the first place, I don’t worry so much about what people think anymore. I’m approaching that season of life where if you mention your childhood, people zone out because they begin to equate it with things like the Civil War. The more relevant factor is that there seems to be an interesting connection between crocheting and the media circus confronting us daily—a ‘common thread’, if you will.

Doilies Look Different than Balls of String ~
The fact that crocheted items are handmade products is so obvious, it never gets questioned or even mentioned. When someone shows off a crocheted doily, for instance, nobody says, “My, what an interesting little wad of cotton,” or “How clever—a bunch of different sized holes tied together with a string.” No, they exclaim things like, “Oh, what a beautiful piece—did you make it?” Conversely, if we show someone a ball of colored string, they don’t begin to gush over it and ask if we made it ourselves. Most of us have sense enough to know one from the other—but what if the product being presented is made of a different kind of string?

Media People—Reporters or Verbal Artisans?
Suppose the raw material is a string of words and events, and the ‘crochet hook’ involved is the latitude to twist and loop them at will. Then the resulting product can be a dangerous distortion of the original material. With a ball of cotton string, the product may be a doily—but with a string of words and events, it’s a ‘narrative’.

If the issues of the day were seen as a ball of string, the job of reporters and news anchors is to present us viewers and readers with a ball of string. But those plaguing our nation today seem to see themselves as above such simplicity. They have become artisans, expert in the craft of verbal crochet and loathe to present a ball of string as merely a ball of string. They compulsively apply their editorial hook to the endless string of words and events unfolding daily. They twist and loop and tie them together until they are transformed into a narrative—another ideological verbal ‘doily’ that distorts and distracts attention away from the raw material from which it was manufactured.

Not a Modern Invention ~
Crocheting is an old art form whether with cotton or linen, like Grandma did it, or with strings of words and events. Malicious thoughts guide the media artisans just as the image of the doily in Grandma’s mind guided her, and neither process is a modern invention. David dealt with it too. His enemies were busily attempting to ‘crochet’ his words and actions into a hangman’s noose. “All day they twist my words,” he said. “All their thoughts are against me for evil” (Psalm 56:5-6 NKJV). Sound familiar? 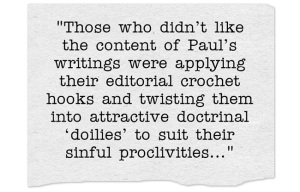 And it isn’t always about politics. Peter revealed that those who didn’t like the content of Paul’s writings were applying their editorial crochet hooks and twisting them into attractive doctrinal ‘doilies’ to suit their sinful proclivities.

Peter said of them, “…Untaught and unstable people twist [Paul’s words] “to their own destruction, as they do also the rest of the Scriptures.”  Then he inserted this very relevant admonition, which is the point for us today, “You therefore, beloved, since you know this beforehand, beware lest you also fall from your own steadfastness, being led away with the error [clever doctrinal doilies or political narratives] of the wicked; but grow in the grace and knowledge of our Lord and Savior Jesus Christ” (II Peter 3:16-18 NKJV).

Altered Perceptions Can Have Eternal Consequences ~
When verbal artisans present a new ‘doily’, they want our attention to be captivated by the skillful narrative they’ve created, so that we don’t focus on the material from which it was fabricated. Perception is a powerful thing, and truth can be lost when the editorial crochet hooks go to work.

There’s a funny thing about crocheted stuff that we all ought to remember. No matter how impressive it looks, if you find and untie the right knot, the whole thing will unravel until all that’s left is the piece of string you started with. After all, it’s just a bunch of holes tied together anyway.

To follow this blog for more ‘Right Side Up Thinking ~ In an Upside Down World’, sign up just below the Search box in the upper right sidebar for regular email notifications of new posts.

Author, Speaker, Bible Teacher, Humorist, Satirist, Blogger ... "Right Side Up Thinking ~ In an Upside Down World" For Ron's full bio, go to GallaghersPen.com/about/
View all posts by Ron Gallagher, Ed.S →
This entry was posted in Faith and Politics, In the News, Insights, Wake Up Calls and tagged Crochet, Doilies, News Anchors, Politics. Bookmark the permalink.