“Final review on Thursday. Testing begins Friday morning.” I can still feel the internal distress I used to get during my high school years when words like these announced that the time for final exams had arrived. It seemed like they were always spoken in somber tones, like a judge pronouncing a sentence, gavel in hand. I could feel my whole future sinking like the Titanic, slowly, still afloat for the moment, but without hope of rescue. The words ‘final review’ only ensured that my recent life would be flashed before my eyes, scene by depressing scene, just before the death throes begin in earnest. 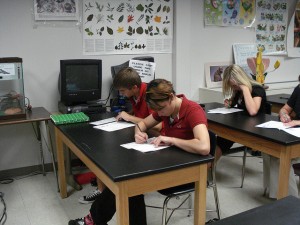 If the teachers ever suggested that the final review was a really good thing designed to help me be successful when the testing began, I never heard it. For me, it was like adding insult to impending injury. Final reviews subjected me to the tedious and painful process of dragging me through all the stuff I didn’t understand the first time. I figured the objective was to make sure that I was fully aware of how much of it I didn’t get prior to the test scores officially announcing it to the whole world. To me, the ‘final review’ was a condemned man’s last meal made up of all the stuff I hate, like having to eat eggplant, marinated in fish oil.

The marvel of maturity has enabled me to entertain the notion that my teachers may not have hated me as much as I suspected they did back then, and that they actually had high hopes for my success. Well… except maybe my Algebra teacher. I think she got through the year clinging to the hope I would run away and join the circus. It took a while, but eventually I realized that those reviews they put us through were designed to be helpful, and that God had employed that device long before any of us ever came along.

As this is being written, it’s New Year’s Eve, 2015, a time marked by a veritable explosion of reviews as multitudes of Americans gather in venues of every description in anticipation of the midnight dropping of ‘the ball’ in Times Square. Attitudes and emotions run the gamut from pessimistic despair, to tearful nostalgia, to alcohol-induced exuberance. TV screens are filled with video clips recounting the preceding year’s most prominent news stories and commentators offering reflections of the prior year’s best and worst events, and reminders of its most noble, and ignoble, characters. It’s like a kind of annual accounting of all the pluses and minuses of the preceding 12 months of life here in America and around the world—a smorgasbord of reviews of the kinds of things we’ve been exposed to during the year. Maybe it would be interesting if we approached the holiday’s stream of reviews with a different perspective? What if we considered these annual reflections more like a spiritual ‘pre-test’ review, and less like an entertaining holiday distraction?

My teachers forced us through those final reviews because they knew that there was a series of tests coming, and that we weren’t as prepared as we needed to be. They knew that some hard questions would be asked of us, and we might not have the right answers. We may have gasped in disbelief when finals were announced, but we had known since back at the start of the semester that they were lurking out there in the shadowy future waiting for us. It’s just that they seemed so far away back then, and it was so easy not to think about them. Now, they were suddenly right in front of us, and most of us felt woefully unprepared. Maybe 2016 is a bit like that.

Among the many other roles God fulfills, He is the preeminent teacher of the ages, and He is continuously engaged in the process. He said through Paul that the entire Scriptural record, the composite account of His activities among us, were “written for our learning” (Rom. 15:4). Among the profound implications of that statement is the fact that God sees everything He does as teaching material. Suppose we brought that idea home and applied it to our situation here and now. What if we considered that everything He allowed to happen to us in 2015 was “for our learning”, and that He allowed those things to happen in order to teach us things we needed to know? I wonder if our reflections on everything we were exposed to during 2015 might take on a different tone.

An interesting thing about how God develops His teaching material is that He includes the good, the bad, and the ugly. He chronicles the greatest victories and the most ignominious defeats without sugar-coating or whitewashing any of it. He reminds us that in addition to the heart-warming blessings and miraculous provisions, there are lies to be dealt with, that betrayals happen, that fortunes can be lost, and that people die. There were some great days in 2015, and days we’d rather forget, but He was there to teach us in every one of them. Looking back at them can, and should be, more than a time of nostalgic reflection. If we look for what God was teaching us through them, it can be a great ‘pre-test review’.

2016 is going to include some hard questions. We’ll face difficult problems and times when coming up with the right answer will be more vital than ever. The Master Teacher invites us to take some time to prepare ourselves by reviewing the lessons He’s already taught us before the next test begins, and to latch onto the benefit that a good review can provide. In spite of the tension those high school reviews caused, they helped us face the test, and to do better. They gave us hope. In light of that, listen to the whole of Paul’s statement in Romans, with a thought or two thrown in…

“For whatever things were written before [about all the stuff that I allowed to happen] were written for our learning, that we through the patience and comfort [of a good review] of the Scriptures might have hope” (Rom. 15:4 NKJV).

Author, Speaker, Bible Teacher, Humorist, Satirist, Blogger ... "Right Side Up Thinking ~ In an Upside Down World" For Ron's full bio, go to GallaghersPen.com/about/
View all posts by Ron Gallagher, Ed.S →
This entry was posted in Faith, Family, and Culture, Holidays, Insights, New Year's, Right Side Up and tagged New Year's. Bookmark the permalink.
%d bloggers like this: