We got some disturbing wake-up calls this past week. The western world was once again shocked out of its familiar routines by the cold-blooded murder of at least 129 innocent people in Paris, and the wounding of hundreds more. The realization that these murders were carried out by religious zealots of Islam was almost as instantaneous as the terror experienced by those in the gunsights of the killers. They’ve been called ‘radicals’ and ‘extremists’, and most of those in the liberal/progressive/socialist political realm have fought to avoid answering the question, ‘Radical about what?’ or ‘Extreme relative to what?’ Political figures and their supportive cohorts in the mainstream press launched into their predictable display of verbal acrobatics in an attempt to sidestep use of the term, Islam. They combined it with their own unique brand of carefully muted, non-offensive shock, designed not so much to display any real outrage as to create the image that they are intellectually superior, emotionally controlled, and politically correct. Equally predictable has been their utter failure to expose any hint of insight into the true nature of the problem, exposing again their total vacuum in the arena of ideas or strategies that might represent a pragmatic, workable solution. 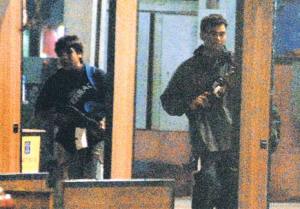 Both President Obama and the presumptive Democratic candidate for his job made it clear that in their minds, Islam is not the problem. The mantra is that it’s only a handful of ‘extremists’, or ‘radicals’, or ‘jihadists’ that create these problems. Hillary Clinton was careful to declare that “We are not at war with Islam.” The inference, if not the direct statement, is that if we are at war at all, we are at war with extremism. Radicalism is the enemy. That being the case, the strategy then must be to somehow eliminate extremism and radicalism. The questions raised above once again seem appropriate. Radical about what? Extreme in relation to what? The five murderers in Paris weren’t giving us a graphic example of the basic tenets of veganism. In spite of Bernie Sanders’ ridiculous assertion that man-made global warming is our most dreaded enemy, and is at fault for the massive invasion of Europe by ‘refugees’, what we saw in Paris was not a behavioral demonstration of that idiotic proposition or its tenets. It wasn’t a malicious sunbeam beefed up on carbon gases that ripped through the bodies of those innocent young men and women. What we did see in Paris last Friday was yet another clear exhibition of the foundational roots and ultimate mission of Islam, which is to subjugate the world to their authority, and eliminate any who disagree or refuse to submit.

Let’s not be confused. The reason that those ‘extremists’ in Paris were able to aim their weapons at innocent people and calmly kill, maim, and/or traumatize hundreds is that the god they worship not only allows it, he mandates it. Muslims throughout their history have spread death, destruction, subjugation, and slavery across the world and they continue to do so today because their deity’s marching orders require it. Extremists, whether associated with Islam or any other ideology or belief system, are always the ones who display the behavioral implications of the foundational tenets and ultimate objectives of that belief system. The radicals reveal without hesitation what their belief system looks like in operation, from the root to the fruit. They are the ones who hold the ideas and philosophies of their belief system as incontrovertible and irrefutable truth, and as such, follow it as the guide for their lives. Those who are identified as radicals take seriously the dictates of the god they worship. What makes the radicals different is that they actually believe the things their ‘moderate’ colleagues only claim to believe. The radicals move the teachings of their founders and leaders from the confines of their worship centers and cloistered lecture halls out into the streets. The assassins in Paris were not sacrificing their lives for an assignment delivered by their ISIS leader, they were obediently carrying out a mission authorized by the god they serve.

Extremism is not the enemy. The most powerful leaders in the history of the world, for good or evil, have been extremists. Monuments are never erected to honor and memorialize a moderate. Moderates do not inspire the masses to rise up and engage an enemy. Men and women do not courageously step up to risk or sacrifice their lives to emulate a waffling, conciliatory moderate. The heroes are the ones who rise above the crowd and demonstrate those values they cling to as the most vital realities of life. Extremists will exist wherever there are ideas to believe.

A major problem with American Christianity regarding extremism is that we are woefully short of it, and I don’t mean that we need a bunch of loudmouth, arrogant, social irritants to fill the land. What we need are those who will fearlessly and consistently live out the teachings of Jesus Christ, who actually know, believe, and take seriously what He stood for, and what He commanded His followers to do. We’ve swallowed the liberals’ foolish argument, that to win the world we must all become more ‘moderate’. And by the way, how’s that been working in the last 50 years? American ‘Christians’ have become more moderate than ever in our nation’s history, and the Church has become weaker with every succeeding generation. Moderates obscure rather than demonstrate what we believe, and have left us with virtually no powerful influence, no unified voice, and no significant impact on the corrupt and hedonistic culture surrounding us.

Author, Speaker, Bible Teacher, Humorist, Satirist, Blogger ... "Right Side Up Thinking ~ In an Upside Down World" For Ron's full bio, go to GallaghersPen.com/about/
View all posts by Ron Gallagher, Ed.S →
This entry was posted in Faith and Politics, Faith, Family, and Culture, In the News, Insights, Wake Up Calls. Bookmark the permalink.