As I held my nose and scanned the surface of the propaganda landfill that passes for journalism in America these days, two stories that are sadly troubling for different reasons caught my attention. One was a story about a contentious issue at the core of a debate raging in Houston, TX. It appears that some of the folks down there are having a difficult time coming up with a working definition of two very complex and hard to understand terms. I guess I never realized what a hopeless conundrum terms like ‘men’ and ‘women’, or ‘male’ and ‘female’ represent, but many of Houston’s civic leaders are at a loss to unravel the mystery of their meaning. It’s like a replay of Belshazzar’s pathetic helplessness before the handwriting on the wall in Daniel 5. 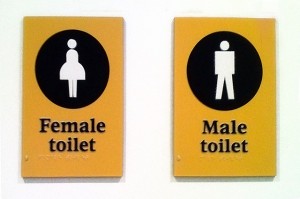 What to Choose–Image by Chrystian Cruz

That apparently leaves some members of Houston’s citizenry trapped in a state of tragic confusion over which public toilet facility to use. Apparently, guys who happen to feel perplexed at times over whether they’re actually a male or a female are liable to be traumatized if they if they can’t decide, or are coerced into using the wrong room. These individuals, for whatever reason, apparently lack the academic credentials needed to examine their own physical evidence and make an appropriate decision (additional government-funded studies needed in this area). Given their unfair disadvantage, they want the option to go in and use whatever public toilets, locker rooms, and other gender-specific facilities they feel most like using at the moment.

Some would call a debate like this ‘stupid’, but it is much worse than that. Stupidity is a lot less disturbing than the level of godless intellectual deviance at work in Houston and many other metropolitan centers of human corruption in America these days.

The second sobering story was the account of the removal of a granite monument to the ‘Ten Commandments’ from public property in Oklahoma City. The monument apparently so terribly ‘offended’ some folks that they had no recourse but to sue the City in search of relief from whatever debilitating condition the monument’s presence caused them. Legal arguments in defense of its preservation failed and its removal was mandated. The mission was carried out under cover of darkness in order to avoid demonstrations and conflict. The offensive words on the monument are gone now, leaving another empty place in our land where the Words of God used to stand as an encouragement toward the highest standards of human conduct, and in its place, another precedent for the victory of phony allegations of offense over admonitions of righteousness.

I wish that whole argument against a public monument honoring God’s obvious truth and its forced removal was merely a stupid thing to do in a country founded on the principles that monument espoused, but it’s worse than that. If it was just a stupid move, then some smart people would doubtlessly figure out how to correct the blunder, but these issues extend far beyond the problem of reduced intellectual ability.

These stories illustrate to me the impact on human behavior when one of God’s most prized characteristics is missing. God has a great deal to say about the qualities of wisdom and foolishness and their implications when applied to our attitudes and behaviors. In colloquial interactions, they are often used as descriptors of someone’s intellectual capacity, but that is not the case here at all. Wisdom is a quality whose very definition and presence is dependent upon an individual’s personal and direct association with God, not his or her intellectual capacity. Wisdom, as God describes it, is only possible within the context of a personal relationship with Him. Foolishness, which is its diametric opposite, is the only remaining option when a relationship does not exist or is not maintained. Neither wisdom nor foolishness will remain isolated and sterile.  They grow and spread, and it might be said that a little of either tends to go a long way.  The extent of their prevailing influence on the quality of our lives is astounding. A couple of examples from the Scriptures help to illustrate my point.

Solomon’s wisdom was unparalleled in his day, and has very likely not been equaled by anyone in history other than the Lord Himself. I Kings 10:1-13 relates the story of a visit to Solomon’s palace by the Queen of Sheba. She had heard stories about him that she, quite frankly, thought were pure fiction, and so she decided to check it out for herself. That passage reveals that Solomon’s wisdom was not relegated to philosophical debates and academic discussions about the deeper mysteries of life. Wisdom was a lifestyle, and it touched more than Solomon’s academic pursuits. Its influence extended through him to bless and elevate the entire kingdom. Their personal welfare, social stability, diplomatic security, overall morale, and economic prosperity were all affected. The blessings extolled in Solomon’s reign were directly connected to the wisdom he was given. When the nation moved away from that, disaster followed.

Now consider the converse implications when foolishness reigns. You’ll find a description in Romans 1:18-32. That passage unfolds the downward progression that results when the only source of wisdom is rejected. About those who turn away from Him, God says,

“they became vain (futile) in their imaginations, and their foolish hearts were darkened. Professing to be wise,” He said, “they became fools” (Rom. 1:21-22 NKJV).

What follows is a catalog of some of the most depraved, deviant, destructive, and damning behaviors and attitudes known to mankind.

Repeatedly, God presents for us a clear and disturbing picture of what happens to individuals who reject His truth and turn away from Him, and to nations that choose to follow the leadership of those who have done so. Foolish men and women cannot effectively lead themselves, and when families, tribes, cities, states, and nations decide to follow them, the devastating impact is multiplied. Their only rescue is the application of wisdom.

God’s suffering servant, Job, asked a question relevant both then and now.

“But where can wisdom be found?” he asked, “And where is the place of understanding?” (Job 28:12). The concise answer follows a bit later, “And to man He said, ‘Behold, the fear of the Lord, that is wisdom, And to depart from evil is understanding’ “(Job 28:28 NKJV).

The good news for us is twofold. 1) Applying God’s wisdom can, and indeed must, begin in us, and 2) it can be as contagious as the plague of foolishness currently engulfing this once great nation.

Author, Speaker, Bible Teacher, Humorist, Satirist, Blogger ... "Right Side Up Thinking ~ In an Upside Down World" For Ron's full bio, go to GallaghersPen.com/about/
View all posts by Ron Gallagher, Ed.S →
This entry was posted in Faith, Family, and Culture, Insights, Right Side Up, Wake Up Calls. Bookmark the permalink.
%d bloggers like this: