It’s Easter Monday, and I have a confession to make.  Prior to Easter’s arrival, I saw a news account regarding billboards in different parts of the country declaring in one way or another that the accounts of Jesus and His life are no more than a myth. Perhaps the approach of the anniversary of His death and resurrection was more than they could handle, so a bunch of them got together and financed a few billboards.  When I first heard about it, the news caught me by such surprise that I barely escaped being scarred for life.  Seriously—I had a moment when I nearly lapsed over into that mental state that our godless friends find not just intolerable, but deeply traumatic, and personally horrifying—I was nearly ‘offended’.  Thank God I felt the adrenalin start pumping soon enough and was able to stop short of that final toggle over.  No one wants to know what that territory feels like.  I’ve never been quite sure exactly what happens to them when they get inadvertently thrown into that abyss by other careless and hateful people like me, but it’s bound to be awful.  After all, the effects are so extensive and irreversible that the only known treatment requires a considerable degree of media news exposure, coupled with several liberal TV talk show appearances, the implementation of numerous additional governmental restrictions, followed eventually, of course by a fresh assortment of law suits, decrees, public policy adjustments, cease and desist orders, and other judicial mandates.  I’ve also heard, though I can’t substantiate it,  that while it doesn’t represent a cure for direct exposure to offensive stuff, many victims find temporary relief by wearing those mask things over their eyes at night and playing Beatles music in an endless loop while they sleep.

In any case, I deftly avoided the mind numbing experience of being offended when I realized that I probably agree with them.   (Shhh…  Don’t scream like that, you’ll scare the neighbors.)  I came to that revelation when I was looking for a connecting cord for a computer hookup recently.  I discovered that I have two boxes of assorted connector cords in my offic 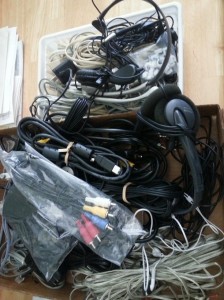 e closet.  The wires are in perfect condition, and should work just fine—no breaks, flaws, or noticeable defects in any of them.  It’s just that the things most of them were designed to connect to don’t exist anymore, except maybe in some landfill.  So, I have a great collection of connecting devices—just nothing to connect them to.  I found that intriguing.  I have hung onto a bunch of carefully preserved electronic tools, and can still plug one end into my computer.  Then I can get instantly hard-wired into about seven different kinds of… well… hmm… let me see… into about seven different kinds of nothing.  That’s not a lot different from the spiritual situation found in some individuals’ lives, and promoted in some ‘evangelical’ groups today.

Think about it.  Men have reached out to connect with, and fervently worshiped, gods that don’t really exist since shortly after that serpent found his way into Eden.  There are as many or more of those non-existent gods now than ever in human history, including a lot of them named ‘Jesus’.  For instance, multitudes worship a ‘Jesus’ today who apparently finds nothing wrong with almost anything, just as long as you claim ‘love’ as a personal motive for doing it—or not doing it.  There’s a version of ‘Jesus’ getting lots of positive attention these days because he only offers Heaven as an ultimate destination, and has such an intolerance for negativity that he has removed the notion of hell altogether—won’t even talk about it.  Then there’s the ‘Jesus’ whose primary objective is to make everybody happy and prosperous, and knows nothing of pain, loss, or personal sacrifice—lots of happy faces around that guy.  We don’t have space to mention all of them, but we can’t overlook the ‘Jesus’ out there who apparently paints himself up to look like the planet earth.  His ‘gospel’ is that that real salvation is achieved through planting trees, eliminating manufacturing (except for India and Asia), supporting Democrats, and breathing lots of clean fresh air—except for the occasional marijuana joint, of course.

I had a professor once who decided to eliminate tests.  Imagine that, a class with no real accountability, just show up if you want to and get as much out of the course as you can.  There’s a ‘Jesus’ out there like that, too.  Speaking of which, the ‘Jesus’ getting so much acclaim today is not like the one in the Bible at all—you know, the ‘real’ one.  Even back then, the real Jesus had problems with being too outspoken and saying a lot of restrictive and divisive things like, “Except you repent, you shall all likewise perish.”  And there’s no wonder his popularity faded in the wake of statements like, “No one comes to the Father except by me.”  It appears that the more sophisticated religious leaders of our day have realized that we need a much more flexible version of Jesus.  We want a savior more akin to a religious smart phone.  Whatever your need, desire, or personal preference, American Christianity wants to be able to declare with absolute confidence, “There’s a ‘Jesus’ for that.”

So, now I can breathe a heartfelt ‘Hallelujah.’  I am no longer in danger of being hurled into a state of offense by the atheists’ billboard, because their reference to Jesus no longer bothers me.  Regardless of how many specialized ‘cords’ we have in our ecclesiastical toolbox, there’s only one real Jesus out there, and a quick Biblical comparison reveals that the one most talked about today does not exist.  So, in regard to the Jesus proffered by most of mainstream Christianity today (and by the popular culture that it has come to embrace rather than challenge), though the name is the same, I heartily concur with the atheists—that ‘Jesus’ “is a myth”.

Author, Speaker, Bible Teacher, Humorist, Satirist, Blogger ... "Right Side Up Thinking ~ In an Upside Down World" For Ron's full bio, go to GallaghersPen.com/about/
View all posts by Ron Gallagher, Ed.S →
This entry was posted in Easter, Holidays, Insights, Right Side Up and tagged Atheists, Easter, Mainstream Christianity. Bookmark the permalink.

1 Response to Connecting with Atheists