A classmate named Allen was my best friend in the early days of high school, so when we had an early dismissal from class one day, it seemed like the ideal time to invite him to come with me to my grandmother’s house. It was a six or seven block walk from school, but I knew the walk would be compensated with more food than either of us needed. Then she’d never let us leave without some kind of sweet treat to cap it all off. Allen would be impressed.

As it turned out, my grandfather was home that day, too. He was a railroad engineer whose work schedule was, from my point of view, incomprehensible. When he noticed that I had

a companion, his attention was immediately directed toward him, and I knew what would be coming next. Pa had a pattern when it came to meeting any of my friends and sometimes it sort of irritated me.

Introduction or Interrogation? ~
“This is my friend, Allen,” I said, knowing that this minimal bit of information would never be enough, and that the opening question of Pa’s inevitable interrogation would come next. “Whose boy are you?” would be the first thing out of his mouth. Then he’d want to know what Allen’s father did for a living. Other questions about the family constellation and background would follow as his investigation continued. In those days, I never saw his little ritual as anything more than an embarrassment to be endured.

I often wondered how I would have handled those exchanges that were sometimes awkward and intrusive. What would I say and how would I feel if I was on the receiving end of those same questions? At that point in my life, the whole “father” issue was an

unapproachable black hole, a mystery that I had no way to solve. My father’s name was all I had, and only that, because my older brother’s name was followed by “Jr.” I didn’t know where my father was, what kind of work he did, whether I would ever get to see him, and for that matter, whether he was living or dead. My mother refused to talk about him, and no one in my family would tell me anything. I thought my grandpa’s keen interest in some other kid’s father was strange when his own grandson would have given anything to be able to answer those questions.

An Adjusted Perspective ~
There was something about my grandfather that I didn’t understand at the time. My assumption that he was disregarding my fatherless status as he questioned my friend missed a vital perspective. Pa didn’t see me as fatherless at all, because in his heart, he had already taken over that territory. Looking back, I know that in his mind, my brother and I were as much his boys as any of his biological sons. For all of my early years, he did everything he could do to fill as much of that empty “father” space in my life as possible. He wanted to know about Allen’s background because he didn’t want his boy to be involved with unsavory characters.

Pa would never have believed that the country he and his sons fought two world wars to defend would ever be subjected to, much less tolerate, the shameless anarchy going on now. He would have considered the hellish scenes that permeate social media posts and daily newscasts to have been beyond the fantasies of the most deranged madmen, and he would have been enraged beyond description at the cowardly response of public officials. And another thing he wouldn’t have imagined was that his simple question to Allen that day would be considered intolerably offensive.

The Unthinkable – Happening Every Day ~
In spite of that, the unthinkable is happening every day, and watching the faux “protestors” and larcenous rioters rampage through streets spreading fear and destruction, makes me think of my grandfather and ponder more than who they are, but “whose” they are. Relationally speaking, where are they coming from? Where are their parents,

especially the fathers? Who taught them that such violent behavior was okay? Who convinced them that it was acceptable to steal, destroy, coerce, and physically maim other people in order to get whatever they want? But perhaps most importantly, what are those of us who declare ourselves to be followers of Jesus supposed to do about it?

Even bringing up the subject of the influence of splintered families and fatherless homes on the riots plaguing our nation will likely be met with a flood of attacks. The chronically offended who roam the denizens of social media will consider it another target for their pretended outrage and regurgitate a flood of leftist talking points. Regardless, I’m convinced that the vast majority of those looting and burning our cities did not come from intact, traditional families. If the truth was ever allowed to be unveiled, we would discover that broken homes, absentee fathers, and spiritual emptiness has a far greater affect on promoting the poisonous hatred infecting our country than the color of anyone’s skin. But it’s clear that truth has been replaced these days by the dictates of the mob with the loudest bullhorns, most money, and largest horde of Twitter trolls. In too many places, fear has brought about the sacrifice of everything remotely related to integrity and wisdom, but it’s not a time for us to hide and wait for better days.

A Time for Action ~
Darkness, and all the evil that lurks within it, is the very reason God sent us with the light that can overcome it. It’s time for all of us to take our lamps out from under whatever might have been covering them, and Father’s Day is a good time to do that. Turning back the heartache and devastation of fatherlessness in the physical realm is vital, but turning back the eternal devastation of spiritual Fatherlessness is even more so. We can begin with a return to openly celebrating and promoting fatherhood and God’s definition of “family” all throughout the yea. Beyond that, we must proclaim the Good News of Jesus Christ at every opportunity. He is the ultimate solution to the problem of fatherlessness at every level.

without a father, but he couldn’t recreate my birth and make me genuinely his son. God is not so limited. He would not be content to simply help us limp along in our relational handicap. He sacrificed His own Son so that through Him, rebellious sinners like me could be born again and made an eternal part of His family. John’s testimony is gloriously clear: 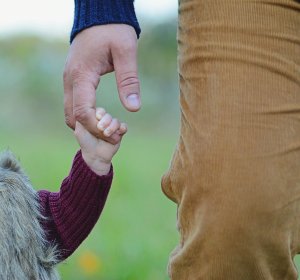 In addition to rejoicing again over our human families and the fathers that we love this Father’s Day, let’s endeavor to do what my grandfather did. Let’s reach out in love to those fatherless people we know, do all we can to help fill that void in their lives, and introduce them to a Father they can never lose. Then, if anyone ever asks, “Whose boy (or girl) are you,” they will always have an answer.