As we come to the end of Christmas week 2019, we’re wrapping up our series of Christmas excerpts from my book, Right Side Up Thinking in an Upside Down World. Producing the book was a challenging, exciting, and rewarding process for us, and we want to continue sharing some selections with our readers that we hope may be a source of blessing and encouragement for you this holiday season. Our prayer is that the excerpt that follows accomplishes that objective as you read our final selection of the Christmas series below, “Another Look at Re-Gifting” . . .

Two distinct but often interrelated phenomena are endemic to this time of year — “Secret Santas” and the process of re-gifting.

The Christmas season unleashes a virtual army of agents into the streets and lanes of our nation. Though called by various names, most know them as the Secret Santas. Their covert mission is to scour every nook and cranny in the immediate environment, and then if necessary, to exhaust the resources of Amazon, Google, Craig’s List, and Hobby Lobby in search of anything that might have a prayer of meeting the assigned gifting standard established by their various dispatchers. They assume clever, non-threatening disguises —  like relatives, workmates, friends, clients, members of the church “family,” and hobby group partners.

Covert Operations ~
Then, once they have acquired their objective, they slip undetected into family gatherings, office parties, church socials, civic clubs, and every other affinity group imaginable. They

blend in with the crowd until just the right moment. Then, abandoning all restraint, the veil comes off and the Secret Santa strikes. He or she (they aren’t gender specific) approaches the target and presents the spoils of their work in a brightly wrapped package that looks deceptively attractive.

Christmas does have its challenges. In almost any group gathering, a Secret Santa could just walk up to you, grinning like a mule eating briars, and shove a gift in your hand. You could be taken totally off guard and left standing there with everybody waiting to see how excited you’re going to be when you open it. Meanwhile, you’re hoping that the expression you’re struggling to create gets interpreted as breathless anticipation instead of a sudden onset of abdominal cramps. Either way, you’re already convinced that this is not going to make it into your list of “cherished Christmas Moments.”

The Post-Christmas Questions ~
At a time like that, you might find hope in the Hallmark Channel. They offer dramatic demonstrations about 947 times from October to January that Christmas miracles do 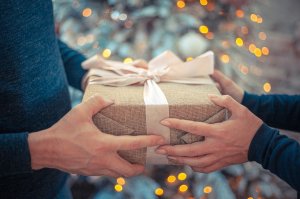 happen, so maybe your Secret Santa surprise will be something you really want. But sadly, in spite of all that Hallmark hope, the Christmas optimism usually fades at about the same rate as the beautiful wrapping paper morphs into worthless trash. Then, important questions begin to fill your mind as you gaze on your newfound
treasure, questions like:

Let’s face it. Re-gifting happens, and we should address it, because the process can harbor the ugly specter of “guilt issues.” For instance, if I re-gift this thing, does it mean that I’m some kind of vanity-ridden Secret Santa diva, only willing to accept gifts of a certain quality or price? Does it mean that I’m a Christmas bigot, unintentionally making unfair judgments about others’ taste in gifts? And while we’re playing the guilt game, how about this one—What would Jesus think of me if I gave something away that someone else has given me?

Actually, that’s a good question. And here’s another one. What if it was never the giver’s intent that a gift be kept anyway? What if re-gifting was what the giver wanted all along? What if giving you a gift was the giver’s way of providing you with something to give

someone else? What if instead of just giving someone a box of cookies, for instance, the gift was a bag of flour, some milk and sugar, a few other required ingredients, and a note reminding them of how many folks don’t have a cookie, but would really love one?

An Intriguing and Challenging Perspective ~
What if our most priceless gifts were meant to provide us with something to give that we could never obtain on our own? The Giver of every good and perfect gift (James 1:17) said this,

As each one has received a gift, minister it to one another, as good stewards of the manifold grace of God. (1 Peter 4:10, NKJV)

Imagine that. Peter makes it clear that God never intended for us to hoard the things we’ve received from Him, but to re-package them in some new wrapping and pass them on to someone else. Wouldn’t it be a paradigm changer if we saw our most cherished things not as too priceless to give away, but as far too valuable to keep for ourselves?

God knew, and Mary would eventually discover, that the miraculous little gift she cradled in her arms was far too precious for her and Joseph alone. God didn’t just send a box of cookies or a loaf of holiday bread. He sent all it took to feed a starving world. The only hope for her—and the world He came to save—lay in the pain of giving Him away. May God help us to do some re-gifting this Christmas season just like He designed it to be.

… To read more, the e-book version is just $1.99 on Amazon now, making it easily affordable for most everyone. E-book readers are included on most computers, tablets, and smartphones, but if you do not have one, the free Kindle app (no Kindle needed) can easily be downloaded directly from the Amazon site on almost any device.

Look for all the Christmas Stories and more in Ron’s book, “Right Side Up Thinking in an Upside Down World ~ Looking at the World through the Lens of Biblical Truth”

Also, check out the Kindle e-version for just $1.99  (No Kindle device needed!)