When Your Firecracker Fizzles . . .

As we left church, someone in our group remarked, “Wow… that was powerful.” The assessment was met almost immediately with affirmative nods and a chorus of verbal “amens.” That kind of response after a worship service is not unusual, and similar comments are doubtlessly replicated from time to time in some form wherever groups of Christians gather. People who experience a significant internal reaction to something they have seen or heard tend to share their reaction with others, especially if it felt unusually compelling and touched them on an emotional and/or spiritual level, so a comment like the one above is not unusual.

The word “powerful” is, well… “powerful,” or at least it purports itself to be. Whether it’s

used to report a reaction to an event or to predict the impact of an upcoming one, it conveys the image of something outside the normal range. We hear the word used around church gatherings a lot, but rarely does anyone ask what kind of impact we should expect in response to it. I learned in my early teen years that the word can evoke incredibly exciting expectations, but I also learned that there’s more involved in defining “powerful” than the dictionary conveys.

Powerful Expectations ~
I don’t know if they’re still making them, but in my earlier days, there was a firecracker called a “cherry bomb.” You couldn’t buy them where we lived and I had never actually seen one, but I had heard stories from some of the older guys about how awesome they were. Then one day my buddy, Tommy, announced to a couple of us that he had gotten his hands on one. I didn’t believe him at first because Tommy was prone to say impressive stuff like that and then never follow through. He’d always come up with some ridiculous excuse to account for not being able to make good on his announcement–like that time he claimed some relative had brought him a real live monkey from Africa, but then it supposedly got some disease and died before any of us got to see it. But that wasn’t the case with the cherry bomb. We gathered out behind the garage, and he reached into his front pocket and pulled it out. It was a circular red ball a little smaller in circumference than a quarter, with a green fuse sticking out of the top. It was the most powerful firecracker we had ever heard of, and we could hardly wait to set it off.

Now it’s important to understand that when you’re blessed with something as impressive as a cherry bomb, you don’t want to just light the fuse and watch it explode. That would be insulting. With a firecracker like that, you want to blow something up. After much

discussion and debate, we decided that the most impressive target would be a sandy area with a bunch of anthills clustered together. We dug a little hole where we figured it would do the most damage and covered it up so that only the green fuse was visible. We leaned over and watched breathlessly as Tommy struck a match and lit the fuse. Then we backed off like crazy to get out of range before it blew. It seemed like the fuse was burning in slow motion, which was great, because we wanted the experience to last as long as possible. Then as the fire disappeared beneath the sand, we held our breath and covered our ears in preparation for the earth-shattering, anthill-devastating explosion. What we got instead was a sound sort of like “pfsssst” as a few grains of sand rising about an eighth of an inch before falling back down.

Devastating Disappointment ~
It was worse than disappointing. There was no crater in the earth filled with fried ants as we’d hoped, and our ears weren’t ringing from the blast. It was despair reminiscent of the exposition of the whole Santa Claus hoax. The experience was unforgettable, but not for the reasons we had hoped. I didn’t get a closeup demonstration of how powerful a cherry bomb really was, but I did learn something about power. We spent days describing with great enthusiasm how powerful that cherry bomb was, and imagining what it was going to be like when we finally set it off. But the firecracker’s power didn’t reside in the words we said and it wasn’t released by our declarations. It’s what happens after you light the fuse that tells the real story. 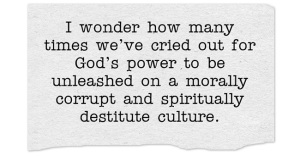 be unleashed on a morally corrupt and spiritually destitute culture. And I wonder how many times our “powerful” sermons and songs have stirred us with hope for an explosive revival, but all we saw instead was another anemic and disappointing spiritual “pfsssst.” Why is that? If the ingredients were there and we followed all the rituals and ecclesiastical procedures properly, why were our expectations left unfulfilled? Maybe the 11th chapter of Hebrews holds a key to the answer.

A Vital Connecting Element ~
This familiar chapter in God’s Word is devoted to an extensive review of the kinds of incredible things that can happen when God’s power is released. The circumstances, situations, people involved, and outcomes vary but there is one common element. Some of the things that happened when this vital element was applied are highlighted as the passage approaches its conclusion:

…Who through faith subdued kingdoms, worked righteousness, obtained promises, stopped the mouths of lions, quenched the violence of fire, escaped the edge of the sword, out of weakness were made strong, became valiant in battle, turned to flight the armies of the aliens. Women received their dead raised to life again. And others were tortured, not accepting deliverance, that they might obtain a better resurrection. Hebrews 11:33-35 (NKJV)

In that glorious unveiling of the power of God at work in the lives of His people and in the real world we live in, the word “faith” is used at least 28 times. It is the principle that connects human beings with the source of omniscient power. But here’s another word involved that isn’t used directly, but the principle is applied emphatically. That word is “obedience.” If God reveals Himself to us in a way that stirs our heart and that we declare to be “powerful,” and it’s not validated by obedience on our part, all we’re likely to see is another disappointing “pfsssst.” Faith that unleashes the power of God that changes the world around us begins with allowing that power to change the world within us.

4 Responses to When Your Firecracker Fizzles . . .