Our six-year-old grandson was about to undertake an important infrastructure improvement project in the neighborhood where they lived, and I got the special privilege

of being invited to help. He lined up his collection of toy dump trucks, excavators, and other construction vehicles in a corner of the vacant lot across from their house and grabbed a long, pointy stick to draw a path for the new road we were about to build. As he traced lines through the sandy dirt and weeds, his attention shifted toward a small mound near the sidewalk a few yards away and his eyes lit up. “Watch this, Grampy,” he said as he walked over and shoved the point of his stick into the center of the mound and stepped back. Suddenly, it was like the grains of sand exploded into life as thousands of tiny creatures attacked the intruder. The stick became acolumn of writhing activity as the creatures swarmed all over it and climbed on top of each other to try to get to it. It was my first exposure to “fire ants,” and it was mesmerizing to watch as they displayed one of the salient characteristics of the species.

Glad They’re Not Bigger ~
We didn’t have fire ants where I grew up, and this was my first personal encounter with them. Our ants were like lazy slugs compared to these hyperactive sociopathic denizens of 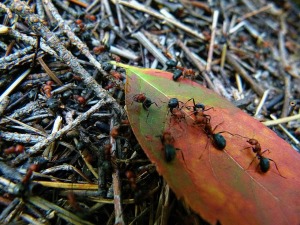 the bug world. My first inclination was to wonder what kind of bad mood God must have been in to create such things. Their total lack of tolerance for any uninvited contact was bad enough, but God also equipped them with teeth on one end and a loaded hypodermic needle on the other. They latch onto their victims with their jaws while they inject their fiery venom with their stinger. I found myself being very grateful that at least God didn’t make them bigger.

Years have gone by since that first encounter with fire ants, and I’ve concluded lately that my initial gratitude for God limiting their destructive influence by keeping them tiny may have been a bit premature. It turns out that certain aspects of the species have managed to find their way into human beings, and this upside down culture we live in is full of them. And in case you’re wondering, no, I haven’t become a Darwinian, and I’m not suggesting the ridiculous notion that bugs can evolve into human beings, but disturbing similarities between us and these belligerent insects are being displayed among us with increasing regularity.

Fire ants have an extremely well-defined and aggressively applied “us vs. them” approach to life. In the fire ant world, if you’re not recognizable as one of them, then you’re either an enemy intruder or a potential food source, or both. The response is the same in either category–they attack with everything they have until the intruder stops moving, and then if it can be eaten, they eat it. If not, they drag it out of the way and get back to obediently serving their queen.

Unmistakable Similarities ~
Now let’s shift our focus from the bug world to one we’re more familiar with. The current state of collective outrage regarding immigration issues reminds me of the fire ant attack launched against that stick years ago. In this case, the assault was instigated by the publication of strategically chosen, and sometimes falsely represented, images of immigrant children. They were presented in a way designed to trigger instinctive responses, and like a colony of humanized fire ants, much of America exploded into a focused and relentless attack. The point here is not to overanalyze the process, but to simply highlight how vulnerable we are to being manipulated into “groupthink” responses by manufactured crises. Like those ants fighting a stick, we can explode into a frenzy of activity that expends our energy, depletes our resources, and resolves nothing.

All it takes to trigger a destructive swarm on many, if not most, university campuses is news that a speaker might be coming whose viewpoint isn’t a product of their own

ideological and philosophical “species.” Similar responses are displayed by their cohorts in the world of politics, news, and entertainment. When their protective perimeter is penetrated by an unapproved idea or practice, they collectively seek to overwhelm and subdue the intruder. They lock on with their social media “jaws,” and immediately begin to inject as much venom as they can generate until the threat has been removed. Fire ants don’t have a diplomatic corps, and those humans who adopt their characteristics don’t either. There’s neither serious negotiation nor opportunity for honest debate. “Search and destroy” is their strategic mission, and their objective is to preserve and expand the colony at all costs.

We can find examples of the explosive rage that characterizes “fire ant” mentality throughout human history. All it took was false reporting by corrupt leadership about who Jesus was and what He came to do to spark enough irrational fear and merciless hatred to turn a gathering of religious pilgrims into an inflamed mob, collectively screaming for Jesus to be crucified. And in the early days of Christianity, when Stephen’s beliefs were seen as a threatening intrusion, ordinary people became a collective killing machine that attacked and martyred him. The feverish intensity of the crowd is obvious in the Scriptural account:

When they heard these things they were cut to the heart, and they gnashed at him with their teeth… Then they cried out with a loud voice, stopped their ears, and ran at him with one accord. Acts 7:54, 57 (NKJV)

A New Strategy ~
Maybe God made fire ants to help us understand how vulnerable we are and what we’re up against in a world run by an oppositional system that sees us as a threat to be eliminated. And maybe modern science is beginning to catch up with Him about how to deal with it. Some researchers claim that the best way to manage fire ants is to alter their genetic makeup; i.e., to change their DNA and disrupt their natural programming in order to dismantle their collective cooperation.

Perhaps science unwittingly stumbled onto God’s strategy. Peter reveals that through faith in Jesus Christ, God is able to infuse His very nature into us. He said that we have been given …exceedingly great and precious promises, that through these you may be partakers of the divine nature, having escaped the corruption that is in the world through lust. II Peter 1:4 (NKJV)

God’s presence through the Holy Spirit interferes with our natural tendencies, like mimicking those around us and attacking anything that seems foreign to our self-serving nature. Fire ants instinctively attack because that’s what their nature dictates, and so do we. Jesus changes what we do by changing who we are. The best long-term defense against this aggressive and oppositional culture is to inject it daily with living demonstrations of the transformational impact of those “exceedingly great and precious promises.”