Financial investment decisions are especially challenging for my wife and me. Years ago we were victimized by some unscrupulous lawyers with a clever Ponzi scheme. Ever since, we tend to offer about the same level of trust to dispensers of financial advice as we do to fortune tellers, time-share salesmen, ‘mainstream’ media news people, and liberal politicians.

To counteract our heightened level of suspicion and skepticism, I began to look for people I could trust in that area and was blessed to develop friendships with a few. One, in particular, had several qualities that made him worth listening to. In addition to being an outspoken Christ-follower, he had achieved an impressive level of success in the business world, maintained an active familiarity with the financial marketplace, and knew how to avoid some of the risks that haunt that world.

An Indelible Principle ~
Unfortunately, he didn’t unveil a magic formula that would ensure lifelong wealth and prosperity, and not everything we chose brought the kind of return we hoped for. Strategies sometimes had to be adjusted, and some choices had to be abandoned altogether, but there was one overriding principle that he hammered home every time we met and from which he never wavered. “Don’t ever put all your eggs in one basket,” he would declare with unshakeable confidence. “Diversify—diversify—diversify. It’s always the best way to protect yourself.” 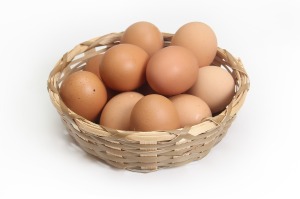 All the eggs–just one basket

Diversity may be self-protective when it comes to financial strategies, but the effect is not universally true. In response to the question of faith, for example, I once heard a comedian declare that after careful consideration, he determined that the safest thing to do about religion was to embrace them all. According to him, the best way to secure his eternal welfare was to become Jewish, Muslim, Hindu, Catholic, and several brands of Protestant. He figured that if he didn’t leave any out, he was bound to be okay because God couldn’t send him to hell for picking the wrong one. If some were worthless, he could still skate by and get into heaven on whichever God preferred.

Diversity – A Key to Utopia?
Diversity has become a mantra in the popular culture and applied to more than financial matters. The idea is virtually worshiped by ‘progressive’ ideologues permeating mainstream media, institutional academia, and every liberal agency and organization in the country. Diversity is heralded by them as the ultimate means to ensure unity, validate love, and express compassion and tolerance. Their admonition—no, make that their demand—is that everyone must welcome, absorb, and celebrate anything and everything in the entire scope of human depravity. Their path to self-protection and social utopia is to embrace every example of bizarre moral, ethnic, sexual, and religious multiplicity so that no one feels threatened. The diversity cult’s total inclusivity is marred by one lone exclusion. Those with a Judeo-Christian world-view are denied because entrance to their utopia requires abandoning absolutes altogether.

An All-or-Nothing Challenge ~
If diversity is always so vital to safety, one would think that the very Author of wisdom would have employed it in His most critical investment strategy. God had something of supreme value that He wanted, but to get it, He had to invest all that was of value to Him—a staggering idea in and of itself. His only hope of gaining what He desperately wanted was to put everything on the line. Nothing could be left out, and no reserve could be protected and held back.

No Backup Plan – No Safety Net ~
God didn’t divide the substance of His supreme investment into 50 different vehicles and spread it around hoping one of them might work. He condensed the entirety of Heaven’s inexpressible treasure and placed it in the womb of a fragile young virgin girl in Nazareth. She carried the living definition of everything God was and she deposited that treasure into a world filled with threats on every side. For God to get the one thing He didn’t have, it was an all or nothing deal. God put every egg He had, so to speak, into that one single basket. If Jesus failed, all was lost forever.

Jesus’ own words reinforced the fact that no other options existed.

Those words were hard to hold on to as Heaven’s treasure was battered, abused, and discarded as a worthless thing. For three days, it looked as though God made a bad deal and that His investment had failed, but then on Easter morning, the One in whom God entrusted everything overcame it all and walked out of the tomb. When He did, He brought with Him a return that offers incalculable wealth to all who, like His Father, would invest everything in Him.

Another All-or-Nothing Challenge ~
Like God the Father, to achieve what we desperately want requires the investment of the most valuable thing we have. Our eternal soul encapsulates every value we have, and our capacity to believe is the mechanism through which we deposit that investment. As it was for Him, so it is for us—all or nothing in Jesus—no diversity possible. Peter said it this way,

“Nor is there salvation in any other, for there is no other name under heaven given among men by which we must be saved” (Acts 4:12 NKJV).

Our comedian friend might garner some laughs with his approach to religion, but blended allegiance and diversity of faith are a spiritual Ponzi scheme that will bankrupt forever all who choose that path—and that’s no laughing matter for any of us.

Author, Speaker, Bible Teacher, Humorist, Satirist, Blogger ... "Right Side Up Thinking ~ In an Upside Down World" For Ron's full bio, go to GallaghersPen.com/about/
View all posts by Ron Gallagher, Ed.S →
This entry was posted in Faith and Politics, Faith, Family, and Culture, In the News, Insights, Right Side Up and tagged Diversify, Diversity. Bookmark the permalink.
%d bloggers like this: