Jesus made a regular practice of doing extraordinary things, but not every lesson included something unusual. Sometimes He would deliver extraordinary messages without utilizing supernatural power. Sometimes he made profound statements by doing ordinary things in unexpected ways or at unexpected times. ‘Palm Sunday’ was one of those kinds of events, full of profound implications, but without a showy exhibition of divine power. There is no doubt that many of those gathering around Him on that day were hoping for some miraculous demonstration of His authority over the laws of nature. After all, the road they were currently traveling had brought them near to where He had recently raised Lazarus from the grave. Why would they not anticipate more signs like that as they approached Jerusalem at the holiest time in the Jewish year? Although they sang and shouted their praise to Him, and were, I believe, genuine in that moment, the Messiah they saw didn’t fit the image that most, if not all of them had in their minds. Their shouts of “Hosanna” were literally a collective prayer that means, ‘Save now’, and it was a perfectly appropriate request for them to offer. They were under the heavy burden of Roman occupation and wanted to be free of the taxes imposed and of Rome’s other oppressive and restrictive demands on their lives. They wanted a revival of a sense of national and spiritual well-being, coupled with personal security and prosperity. Looking at this physically unimpressive guy on a donkey may not have been as inspiring as they would have preferred. 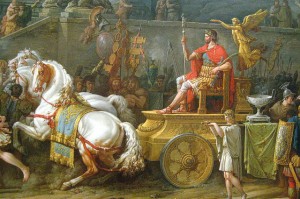 This event was a wholly unanticipated and inconsistent move for Jesus. He had, for most of His ministry, avoided any public declaration of Himself as the Messiah. He had discouraged His followers from using that kind of terminology about Him, and He was more likely to refer to Himself simply as “the Son of Man” than anything else. Everything about Him until that day had been low-key to the point of frustration for His followers. But all that seemed to be changing as He approached Jerusalem and the culmination of His mission. He purposely presented Himself precisely as the prophet Zechariah said the Messiah would—on a donkey’s colt. Whether the majority of the crowd ‘got it’ or not, He was making a statement that the religious leaders in the crowd could not possibly avoid or ignore.

‘Palm Sunday’ is a familiar title for this unique episode, but it isn’t the only one. It is also referred to as ‘The Triumphal Entry’. The ‘Palm Sunday’ appellation obviously fits, but what about the ‘Triumphal Entry’ designation? Use of the term begs the question, ‘Triumph over what’?

Let’s be honest, the picture we get from the text definitely shows excitement, and perhaps anticipation, but doesn’t produce an image that seems all that triumphant. Jesus certainly didn’t look like someone celebrating a major triumph. For one thing, He was way under-dressed for a triumphant procession. There isn’t anything to indicate that He even had a new outfit. As nearly as we can tell, He was clothed as He always was, in the common ordinary garb of a Rabbi from the poorer classes. He had no choreographed entourage to spice up His image, just the rag-tag bunch of work-a-day men and women who followed Him around, listened to His teaching, and assisted Him in whatever way He directed.

If this was a triumph, it couldn’t have been mistaken for a military one. In spite of any references that might have been made to Him as the Son of David, and thus the upcoming King of the Jews, the position apparently included no local military force, and He had no attending commanders or troops. Jesus had accomplished no heroic exploits on a battlefield that anyone else could have seen. He had engaged no human opponent in a physical struggle and had slain no human enemy.

He had no diplomatic triumph to claim or celebrate, either. There was no aspect of problematic Jewish foreign policy over which Jesus emerged victorious as the Jews’ premier statesman. He did not enter the debating halls to do verbal battle with Roman diplomats and attempt to win them over to His way of thinking. Neither did He confront the Greek philosophers in their academic halls and present His arguments in their arenas. He wasn’t an official representative of any organization, agency, or government. He wasn’t recognized as a leader of any currently recognized sect, party, or group. If this was a ‘triumphant’ procession, it was definitely a peculiar one.

Whether the crowd was a bit disappointed about any of that or not is pure conjecture, but I think some of them might have been a little let down. After all, we want heroes to be larger than life, sporting a ride we can’t afford, exuding a commanding presence we don’t have, dressed in garments we could never wear, and displaying physical strength and intellectual genius totally beyond us. In other words, we want heroes who aren’t so much like us; and it’s just as well, because in case you haven’t noticed, our triumphant heroes riding on the prancing stallions don’t invite us to be like them, and generally seem smug and content in the awareness that they are not like us.

Jesus didn’t look like much by the world’s standards that day, but that’s OK, because His triumph was not ‘in’ this world’s system, it was ‘over’ it. Now, from His humble place on a simple donkey’s back, He calls to us in our ordinary clothes, and with our oppositional nature, and frustrating weaknesses to come follow Him, and be like Him, to find eternal triumph – with Him and through Him.