Remember when the Israelites had gotten past all that wilderness wandering and were finally poised to enter the Promised Land? When Joshua sent 12 spies in ahead of them to gather some intelligence prior to their impending invasion? You can find the story in the second chapter of Joshua. A couple of the spies ended up in Jericho at the home of a woman whose name was Rahab. She was a harlot, but since this isn’t a Hollywood production, we’ll leave it at that. Let’s just say the visit to Rahab’s place wasn’t a business trip, and get on with our story.

Rahab did provide some very valuable intel, but that’s not all. She put her own life at risk to save theirs by hiding them and misdirecting their pursuers. All of which put her in a position to ask that her good deed be returned when the invasion came. The spies struck a deal and assured her that they were willing to spare everyone found in her house. All they needed was a sign to authorize and secure the agreement. That sign would have vital personal significance to Rahab and her family, as well as the invaders, so it had to be clear and distinctive. 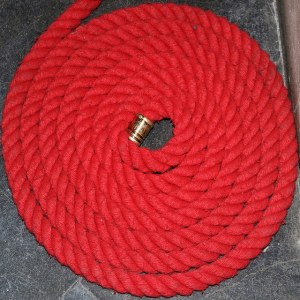 Now… I have a point I want to make that pulls me into some potentially risky territory. I want to hazard an observation, and I disclaim beforehand any involvement or inference regarding the mythical ‘war on women’, so please don’t send me hate mail. Anyhow, I think women…, well, OK, some women (certainly not my wife, of course), like to confront us guys with things that have weird, unnatural colors. Perhaps they share some kind of conviction that we need to be punished. Regardless, they know full well that most of us, because we’re ordinary guys, have absolutely no idea what these colors are, yet they hold them up in front of us anyway and request an immediate response. Then they just stand there and look at us with one of those bright-eyed, curious expressions and blink, like they can hardly wait to hear our opinion. We, of course, have none. For us, it’s no different than if they had succeeded in a secret project to cross-breed a giraffe with an aardvark, and had just led us by the hand out to the barn and showed us the offspring, and said, “There…, what do you think?” Looking at one of those non-colored colors is just like that. We might as well be looking at a ‘girrdvark’. We don’t know what it is, but we can tell right off that it ain’t normal, and we’re pretty sure God’s not in favor of it. Here’s an important and enduring truth. The fact that a guy can stand there and look right at a color doesn’t mean that he has any idea what it is, or that he should be expected to answer questions about it.

Most ordinary guys, unlike some other kinds of people, are not plagued with a nagging intolerance for just leaving weird colors alone. We aren’t compelled to ponder their role in the universe and invent names for them.  Those with lesser ability in that regard create whole new vocabularies.  Then they proceed to pummel guys who are not complicit in any way with phrases like, ‘heather-toned mauve’. It’s painful. They don’t understand how we are gifted with the ability to gaze at a greasy piece of three-day-old road-kill, and just walk away.  We can do that with full awareness that it was doubtlessly some kind of color, but remain totally free of any desire to give it a name. That’s why colors like ‘possum drab’ don’t find their way onto a guy’s color palette. We like primary colors, because to us, they are the real colors. They aren’t confusing. They’re distinctive. They stand out. You don’t have to look at them and wonder what they are.

There, I’m glad we had this little talk, and I feel better, don’t you? Now, back to our story. Once Rahab and the spies had agreed on the deal, they needed some way to secure it, some agreed-upon authoritative sign. Do you suppose it would have gone like this?

Rahab: “Oh, I really like that. I think it should be something simple and unobtrusive, a nice accent piece that won’t attract a lot of critical attention and get us in trouble.”

Spy #2: “How about using a piece of rope? We could ditch this gaudy red one and find something with a soft natural tone, like more of a taupe maybe, with some beige highlights…, you know, a shade that doesn’t clash with that awful orangey mortar they used in this section of the wall.”

That would have been ridiculous, wouldn’t it? This was war, not the Jericho ‘parade of homes’. They needed a signal that couldn’t be missed, one that wouldn’t blend in and be lost in the surrounding environment. They needed a sign that was unmistakable and that denied confusion. Lives depended on it. Judgment was imminent and unavoidable and death was on Rahab’s doorstep. Deliverance demanded an identifiable distinction. Red made sense, didn’t it?

There is a connection here. Ropes were commonplace items, but hers needed to be distinctively different. So, by the way, do we. Our presence in this culture has a redemptive purpose, and unmistakable distinctions are vital. God didn’t send us here to adorn the moral anarchy surrounding us like some kind of irrelevant accent piece. If we are to be effective in the role we’ve been given, it must be clear not only ‘that’ we are, but ‘what’ we are, and ‘why’ we are. Paul addressed this issue with a sobering question,

“…if the trumpet makes an uncertain sound,” he said, “who will prepare himself for battle?” (1 Corinthians 14:8 NKJV).

God’s judgment on this evil world has already been determined. Nothing can change that, but He has offered a redemptive ‘New Covenant’ of hope in Jesus Christ, and has chosen us as His instruments to signify and declare it. If we ‘blend in to fit in’, the message becomes indistinct and confusing. And to use Paul’s analogy, if the bugler sounds more like he’s playing jazz than sounding an alarm, he may only encourage the people to dance their way to destruction.

Author, Speaker, Bible Teacher, Humorist, Satirist, Blogger ... "Right Side Up Thinking ~ In an Upside Down World" For Ron's full bio, go to GallaghersPen.com/about/
View all posts by Ron Gallagher, Ed.S →
This entry was posted in Admonitions for This Hour, Faith and Politics, Faith, Family, and Culture, Insights, Right Side Up, Series Topics, Wake Up Calls and tagged Jericho, Rahab, Spies. Bookmark the permalink.
%d bloggers like this: