Labor Day weekend 2014 is upon us. It’s a holiday, and none of us wants to think but so seriously about work, even though we do love watching the work of others and passing judgment on it. It’s an American pastime that eclipses baseball and rivals Facebook. We’re obsessed with it—fans remark on how the coaches should have directed the team, and how particular players could have done better. Employees declare how the CEO should have handled that meeting, and church members are quick to point out what the pastor should have, or should not have, included in that sermon. We even comment occasionally on how other people drive their cars. Shocking. There is no shortage of opinions about the performance of others, and who should do what in reference to it.

A friend of ours recently related the following scene, for instance. She was busily working away at her desk, and realized that a couple of co-workers had been standing at a window nearby for an extended period of time. They weren’t talking much, just two guys quietly staring intently out the window. Curious, and pretty sure the agency’s standard operating procedures did not include that particular ritual, she set out to determine what they were doing. 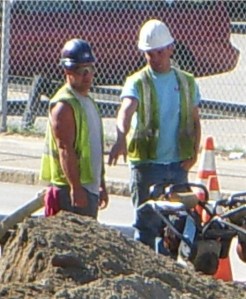 She soon discovered what the view was outside the window that was so mesmerizing. A major construction project going on right across the street, and their office being several stories up made the window a prime observation deck for the guys. One of the activities going on below on that particular day involved digging a hole. Now our friend, being female, failed to grasp how captivating such things are to ordinary guys like us. If the Grand Canyon had been discovered by a woman, it would never have become an attraction until some guy happened to stumble across it. A woman explorer may have simply glanced at it and put a notation in her journal for future map makers like, ‘large inconvenient ditch—avoid this area’. Guys, on the other hand, know that such things require our undivided attention and demand that we gaze at them and ponder their significance. We find all large holes in the ground compelling and somewhat perplexing, especially construction holes. We are curious about why a certain hole has to be dug in a particular place, and why, once dug, most of them end up having to be filled in again and covered up. Unexplained phenomenon like that bother us—like why some guys suck on mouthfuls of sunflower seeds and then spit the slimy hulls into leftover coffee cups. Is this some sort of health-related trade-off in place of ‘smokeless tobacco’, or is there word out on the street that it contributes to the production of testosterone and makes them irresistible to women with tattoos? Something inside us guys makes us want to know things like that.

In any case, that these construction holes are vitally important is evidenced by the presence of guys dressed in jeans, boots, and hard hats, whose job it is to stand at strategic points around the perimeter of the hole and to look down into it and frown. Pointing is sometimes involved, but it’s optional. These men are known to us as ‘hole-lookers’. Every guy knows that hole-lookers play an indispensable role in any large construction project. We’re just not sure what it is. We’re never sure, either, how many to expect, because the numbers vary. We have serious questions about these guys—like whether a hole-looker can just walk up and look into any hole, or if they have to be certified, and they can only look into certain kinds of holes. It could be that they’re included in the overall specs for the hole. Maybe when construction bosses order holes, they come with certain features, like their own pre-arranged set of hole-lookers. Bigger holes would naturally get more guys, smaller holes probably just one or two. And for the sake of clarity, we might also note that the hole-lookers have nothing to do with actually digging the holes. That task is left exclusively to the hole-diggers, which represents an entirely different set of mysteries we’ll leave for another discussion.

But I digress—back to the guys at the window. By this time, each had taken an extended block out of his highly compensated work schedule and devoted it exclusively to pondering the marvels of the construction hole. It’s tempting to call it ‘in-depth’ consideration, but I would never do that. Finally, it came time to wrap up their research and report their conclusions. They looked at each other, wagged their heads soberly, and remarked something like, “Can you believe that? Those guys down there are just standing around doing nothing—and getting paid for it!” Our friend would probably have liked to have said something upon hearing the comment, but certain levels of incredulity tend to paralyze the larynx.

We’re not the only ones interested in the concept of work, or in watching it being done. It’s pretty important to God, too, and He doesn’t just stand off and observe us in order to make critical comments about our inadequate performance. He has something much more profound in mind. Jesus invites us to engage in interactive participation with Him, and to bring us into a realm where His work and our work are the same work. Not only that, there is a second element that He intends to include as well. God’s first exposure of Himself to us in His Word was in the context of His work in creation. Once that was done, He introduced the second major element, a time of ‘rest’. Our Father blended those two vital components together in formulating His approach to work, and has passed them along to us.

As we reflect on this holiday, let’s celebrate our opportunity to work together with Him, and for Him, and remember that the promise of rest was not predicated on the perfection of our work, but on the perfection and completion of His work on our behalf. The Father celebrated the completion of both His creative and redemptive work by taking a break. It may seem incongruous that we would celebrate ‘Labor’ Day by taking time off, but maybe it’s more like Him than we think.

Author, Speaker, Bible Teacher, Humorist, Satirist, Blogger ... "Right Side Up Thinking ~ In an Upside Down World" For Ron's full bio, go to GallaghersPen.com/about/
View all posts by Ron Gallagher, Ed.S →
This entry was posted in Holidays, Insights, Labor Day. Bookmark the permalink.