We have a newly coined term in America. ‘Fake news’ has achieved iconic status in the wake of our recent Presidential election, and has become a battle cry for some and a call for vengeful retaliation for others. The ‘Media vs. Trump’ war of words rages hot and heavy across the land on several fronts, and we are being exposed to the devastating impact that results when the distinction between fiction and fact becomes indistinguishable. Supposedly trusted sources of information have become so obsessed with promoting a political agenda that they have shown themselves willing to abandon truth, obfuscate reality, and replace it with ‘fake news.’ There is more involved with this issue than simply presenting a variant point of view, and much more at stake than scoring political points. 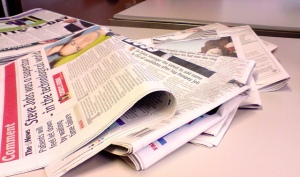 A Sobering Revelation ~
If the idea that ‘news’ can be twisted into something akin to a mental straight-jacket for multitudes isn’t disturbing to you yet, let me help you along with this little tidbit. In an exchange with one of his guests recently, Mike Brzezinski, a commentator with MSNBC, indicated that their job, i.e., the task of the ‘press’, is basically to control “exactly what people think”.

Let the chilling reality of that revelation soak in for a moment. When ‘thought control’ is the primary objective of those who decide which words and ideas get served up as facts, then those who trust them are in grave danger. The information we receive determines what we believe and how we think, and that comprises the control center that dictates the kinds of attitudes, values, and behaviors we express. Owning that control center is the shiny brass ring sought after by the architects and distributors of ‘fake news’. Thus, they relentlessly pursue any shred of material that can possibly be massaged into something that seems to support the conclusions they want to implant in the minds of their consumers. They condense their foregone conclusions into fictional narratives and cling to them as tenaciously as they once accused multitudes of conservatives of clinging to their Bibles and guns. Truth for its own sake is never a consideration for them.

A Fake News Source Easily Overlooked ~
We’re all too familiar with the obvious perpetrators of fake news, but there’s another source that we sometimes overlook, and it has far greater potential for extensive impact on those exposed to their message than any broadcast agency or media newsroom. We rarely think of the churches woven into our communities, dotting our countryside in the context of news agencies, but consider this… No series of crass political hit pieces cranked out by the liberal media, no university curriculum promoting some perverted philosophy, and no movie studio propagating any degree of violence and human depravity can begin to compete with the potential for destructive personal and social impact that can result from ‘fake news’ about Jesus Christ.

The body of truth entrusted to the Church holds more than social welfare in its grasp. Its scope encompasses the reality of eternal life or death for every person, and defines the way to gain the one and avoid the other. Seeing the Church as a ‘news agency’ might seem strange, but the idea isn’t new. Here are just a few supportive indicators:

What About Fake Sermons?
Any representation of Jesus Christ that conflicts with, or contradicts the Biblical record, would fall into the category of ‘fake sermons’, and tragically, we are inundated with them in America these days. Want to hear some examples?

If it seems like ‘fake news’ that doesn’t match the facts on the political front is devastating to America’s best interests, maybe we should take a fresh look at the moral cesspool our nation has become, and start doing some Biblical ‘fact checking’ on some of those ‘fake sermons’ pouring out of our pulpits every Sunday.

To follow this blog for more ‘Right Side Up Thinking ~ In an Upside Down World’, sign up just below the Search box in the upper right sidebar for regular email notifications of new posts.

Author, Speaker, Bible Teacher, Humorist, Satirist, Blogger ... "Right Side Up Thinking ~ In an Upside Down World" For Ron's full bio, go to GallaghersPen.com/about/
View all posts by Ron Gallagher, Ed.S →
This entry was posted in Faith and Politics, In the News, Insights, Right Side Up, Wake Up Calls and tagged Fake News, Fake Sermons, Pulpits, social welfare, Thought Control. Bookmark the permalink.