See How Much I Love You?

I saw a Valentine’s Day-inspired commercial last night advertising a huge stuffed bear. When I say ‘huge’, I mean it was about the same size as the guy carrying it. The two of them squeezing through the door evoked visions of the Three Stooges trying to do the same thing. He presented it to the damsel waiting inside with semi-humble gallantry, as though it was his reward for having saved the kingdom by unhorsing the evil black knight, which feat he accomplished while flying her perfumed hankie from the little pointy thing on top of his helmet. Her eyes widened, ostensibly to exhibit excitement mingled with the shocked disbelief that the poor schmuck had managed to dream up something as wonderful and stimulating as this dust bunny on steroids. Then she began to cuddle with it—which she could do, by the way, without even having to sit down—whereupon her expression morphed into something that was either meant to suggest things that shouldn’t be shown on TV, or an attempt to hide some kind of gastric distress. Either way, the whole scene was intended to depict an unforgettable relational milestone. 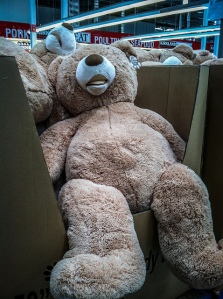 I imagined Diane’s eyes if I came home with a thing like that. It would be akin to me coming home with an announcement that I felt led of the Lord to breed skunks as a ministry. The bear was so huge it needed either its own piece of furniture or its own closet—or both. If you took it to bed, you’d better be planning to sleep alone, because there would be no place for anybody else. Come to think of it, maybe that’s why she got so excited. Maybe the excitement was the rush she got from the realization that she finally had a way to get the insensitive redneck who dragged it home to go sleep in his own bed and leave her alone so she could get some decent rest. After all, huge stuffed bears don’t snore, or make other unintelligible noises in the night, or have breath that could strip varnish off antique furniture. A bear wouldn’t be flopping over on her side of the bed and drooling all over the pillow, and it wouldn’t be thrashing around half the night like an outnumbered Ninja fighting for his life. Hmmm… I think I’m beginning to see the magic in these stuffed bears now. It’s passion, alright, but not romance. It’s the passionate desire for an uninterrupted night’s sleep.

I know what you’re thinking. Spiritual issues like this are compelling, aren’t they? Well, OK. So you aren’t thinking that at all, and it doesn’t seem all that spiritual, or compelling. I might as well concede, too, that there probably aren’t a lot of doctrinal issues wrapped up in the trafficking of stuffed animals. On a personal level, I like stuffed animals. In some cases, I prefer them over animals that require me to feed them, walk them, groom them, clean up behind them, and replace things they chewed, clawed, stained, or passed through their digestive system. What we have regarding this commercial is an interesting glimpse at the kinds of unusual things we do (especially in February) in an effort to say, “I love you.” That grants us a warrant to indulge in a spiritual observation or two, because after all, the whole scenario in the commercial was promoted as a means to express ‘love’, and love is a God thing.

That being said, one thing we should not miss this time of year, and cannot overstate, is the distance we’ve managed to move away from anything remotely resembling God’s approach to expressing love. It’s intriguing to compare the superficial trinkets we often present to one another as validation of our undying love and devotion vs. the kinds of things God chooses in His effort to do the same thing. It would seem reasonable from any perspective that the things chosen as expressions of the nature and quality of the love we profess ought to be at least somewhat consistent with the nature and quality of the love itself. If we declare a love whose strength and value overshadows everything else in our life, then to the best of our ability, things chosen to express it should reflect that. To do less than that would seem to demean the love we claim to have, to re-define it altogether, or expose our declarations as disingenuous.

Consider a couple of love expressions that the Lord Himself found impressive. Though usually treated as a faith issue and not a love issue, I believe the two are interconnected, just as love and trust always are. As Jesus stood observing the parade of those making offerings at the temple, He cited with admiration the offering of a poor widow. Her “two mites” were of such little value that most would have thought them irrelevant, if not insulting. Jesus did not. He said (paraphrasing, of course), “Did you guys see that? She put more in than all those rich guys who came by.” She had no possessions to offer worthy of the love she had for God, so she simply gave everything she had to give—what an incredible expression.

Then there’s the example of a broken woman whose redeemed heart became a fountain for a love that she didn’t know how to express. As she knelt at Jesus’ feet, that love found its way through her eyes and dropped onto the feet of the One who would take her sinful and wasted life, transform her, and treat her as though it never happened. Her expression of love was criticized by those who watched as she kissed His feet and wiped them with her hair. It was a simple act, and not worth much in the marketplace of the culture, but Jesus found it perfectly suited to the love that prompted it.

Love is in the air these days, or so we’re led to think. Maybe what’s in the air needs a fresh look. If all we have to express our love is some superficial trinket, maybe what we have inside is not such a treasure either. After all, aren’t we glad that Jesus didn’t show up with an overgrown wad of cotton for each of us saying, “Here—see how much I love you.”

Author, Speaker, Bible Teacher, Humorist, Satirist, Blogger ... "Right Side Up Thinking ~ In an Upside Down World" For Ron's full bio, go to GallaghersPen.com/about/
View all posts by Ron Gallagher, Ed.S →
This entry was posted in Faith, Family, and Culture, Holidays, Insights, Right Side Up, Valentine’s Day and tagged Valentine’s Day. Bookmark the permalink.

4 Responses to See How Much I Love You?