Independence Day 2020 is certainly different from any we’ve seen, and the challenge of addressing the subject of freedom is both more challenging and more necessary than ever. I had begun this piece in a pretty sarcastic mood initially. I thought of the calls to get rid of the police, for instance, and was going to declare it to be a good idea . . . only ‘not’ in regard to those courageous men and women of the police force who put their lives at risk every day to protect and defend us from those who would do us harm. Their role in

this sin-cursed world is indispensable. My suggestion would be to call out the abusive practices of the “Thought Police” and that collection of bullies known as the “Political Correctness Police”. Those self-appointed promoters and guardians of coerced mental conformity, behavioral constraint, and spiritual constriction are the sworn enemies of freedom and should be removed. They lurk in every classroom and every social media platform and consider themselves to be the ultimate authorities regarding which opinions, ideas, beliefs, relationships, behaviors, and world views are acceptable and which are not. Let’s start police reform by dismantling them.

Conflicting Views of Freedom ~
But I don’t want to let sarcasm reign on this day when we celebrate freedom. Other than the Gospel of Jesus Christ, freedom is the most cherished gift God ever gave to this country, but it’s being misrepresented, maligned, and confused these days. We’re seeing conflicting ideas being displayed every day about what the term implies. Some are expressing the notion that freedom means they can do anything they want to do with total impunity. Others counter that idea and declare that our freedom is defined by the rule of law and exists within the boundaries dictated by those laws. If freedom can mean anything we want it to mean, then it has no real definition at all. Clearly one of those basic definitions of freedom leads eventually to chaos. We’ve seen that being played out on nearly every news report for months now.

There’s no question that the idea of practicing freedom without boundaries and limits was never God’s intent. That approach to freedom begins a paradoxical process wherein the greatest obstacle to freedom is freedom itself. Without limits and boundaries, freedom

becomes tantamount to standing permission to follow our instincts and desires wherever they lead. Unqualified permission becomes a license to practice whatever lust stirs us most. Our sin nature coupled with an invitation to do whatever we want always leads to excessive indulgence. That produces a pattern of behavior that transforms what was initially a desire into a craving, and then into an indispensable need. When personal indulgences become non-negotiable needs, it leads back into bondage. In the end, the “free” person is no longer free at all, but no more than a shackled slave, bound by the habits attendant with the lifestyle that false beliefs and a flawed concept of freedom allowed and established.

Avoid the Circular Potential ~
The kind of freedom that Jesus came to secure protects us from the circular potential that misunderstood freedom can become. The Apostle Paul alluded to that possibility with this admonition:

Stand fast therefore in the liberty by which Christ has made us free, and do not be entangled again with a yoke of bondage. Galatians 5:1 (NKJV)

The liberty Jesus offered was never an open invitation to do anything we want. His approach was quite different from anything being displayed today, and it provided a

source for incredible courage. When the leaders of the early Church were threatened with beatings and the loss of their liberty simply for proclaiming His Truth, their reaction was condensed into this simple, but powerful principle:

But Peter and the other apostles answered and said: “We ought to obey God rather than men.” Acts 5:29 (NKJV)

That seems easy to say, but the courage to actually live it out has a source that lies in an understanding of freedom that we often overlook. The kind of courage that those early disciples displayed and that has been a hallmark of the followers of Jesus for over 2,000 years doesn’t come from practicing religious rituals, preaching more sermons, or having more praise and worship meetings. Their fearlessness in the face of life-threatening situations was rooted in an understanding and deeply held belief in the freedom that was theirs because of their faith in Jesus Christ. They were consciously aware of possessing the most powerful and unassailable freedom that can possibly be had. It comes down to this, no threat of bondage or physical harm can intimidate someone who’s already dead.

The Most Complete Freedom Ever ~
We may not tend to see it that way, but death is the most complete and all-encompassing freedom that can be had in this world. Death mocks every human legal system and form of

punishment that has ever been conceived or practiced since time began. Death laughs at threats of violence of any kind and from any source. If all the accumulated arsenals of all the military forces mankind can produce suddenly targeted a dead guy, it wouldn’t bother him at all. Dead folks have no fear of bullets, bullies, or bad times. They aren’t bothered by the threat of famines, plagues, fires, or natural disasters. Personal rejection doesn’t bother dead people, either, and no amount of social media bashing ever worries them at all. Truth is, there’s not much you can do that will have any impact on someone already dead. In light of that, Paul made a statement that explains a lot about how courage overcame fear in the life of Jesus’ followers:

… Do you not know that as many of us as were baptized into Christ Jesus were baptized into His death? Therefore we were buried with Him through baptism into death, that just as Christ was raised from the dead by the glory of the Father, even so we also should walk in newness of life. For if we have been united together in the likeness of His death, certainly we also shall be in the likeness of His resurrection, knowing this, that our old man was crucified with Him, that the body of sin might be done away with, that we should no longer be slaves of sin. Romans 6:3-6 (NKJV)

I have been crucified with Christ; it is no longer I who live, but Christ lives in me; and the life which I now live in the flesh I live by faith in the Son of God, who loved me and gave Himself for me. Galatians 2:20 (NKJV) 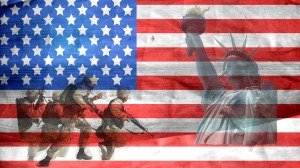 As important as they are, the confidence and courage we need to confront the threats leveled at us this 4th of July won’t be granted by political victories. They can only come with the freedom that is ours when we walk out of that tomb with Jesus Christ. Our declaration of dependence on Him will grant us a freedom that no one can take away and the courage to live it out. In the midst of the chaos currently plaguing our nation, followers of Christ can still have a happy – and eternally free – Independence Day.