A Time for Others

One of the many things we praise God for in this trying time is that Covid-19 cannot be transmitted through digital contact. In the interest of full disclosure, I’m sitting here at my computer with my whole face hung out, uncovered and unprotected, but in spite of that, we’re not putting your health in danger. Even if I sneeze all over my keyboard, you’re still safe. And speaking of keyboards, mine has been in constant touch with fingers that recently handled a box from Amazon. That means that in this current crunch to order everything online, it could have been shipped by robots made with contaminated Chinese parts or had labels licked by specially trained chimpanzees, both of which are willing to touch stuff that no reasonable human being wants to handle, and neither of whom are ever seen taking a break to go wash up.

From Unpredictable to Unshakeable ~
Unfortunately, though what we produce arrives at your house virus free, we cannot offer any help with the toilet paper shortage. What we can do is to suggest that we turn our attention away from the many unpredictable factors that tend to ramp up fear and focus instead on some unshakeable directives from God.

Covid-19, and the Apostle Paul had a message for them that would benefit us today. Here’s part of what he had to say:

Therefore if there is any consolation in Christ, if any comfort of love, if any fellowship of the Spirit, if any affection and mercy, fulfill my joy by being like-minded, having the same love, being of one accord, of one mind. Let nothing be done through selfish ambition or conceit, but in lowliness of mind let each esteem others better than himself. Let each of you look out not only for his own interests, but also for the interests of others. Philippians 2:1-4 (NKJV)

Not Written from the Riviera ~
It’s important to realize that Paul was not writing this uplifting document from a spa on the Riviera. If we described his situation from today’s perspective, we might say that he was involved in an extended period of personal quarantine. But his social distancing was being secured by the locked doors of a Roman prison.

In spite of His personal suffering, the tone of Paul’s letter wasn’t pessimistic or self centered. He didn’t warn the believers in Philippi to conceal their faith in order to protect

themselves from a fate similar to his, quite the contrary. He wrote to encourage them to continue to openly live out the faith that they had seen in him even if it made them targets for persecution. He assured them that the rewards would always far outweigh the risk. Even though the atmosphere around Paul’s readers was full of uncertainty and the threat of persecution, he admonished them to focus their attention away from themselves and react in a way that ran counter to their natural instincts.

No Uncertainty Intended ~
Paul didn’t just jump into a list of dos and don’ts. He began by stringing together at least four statements beginning with the word, if. That word seems to suggest a degree of uncertainty regarding the statement that follows it, but that was hardly Paul’s intent. He was guiding them to establish a solid foundation in their hearts for the behavior that would be most effective in overcoming their fears and strengthening the Church of Jesus Christ. The language doesn’t sound as though he was asking questions, but in essence, that’s exactly what he was doing. Turning his statements into questions helps to illustrate the mindset that Paul’s opening statements sought to establish. We might rephrase them this way:

Everything Paul would ask them to do or not do was based on what Jesus had already done for each of them. The lifestyle they were called to live was to be marked by

selflessness and humility, attitudes that stand in stark contrast to natural human instincts. His admonition to deny impulses toward self promotion and divisive confrontations was based on their exposure to the kind of love that was embodied in Jesus and that Paul demonstrated among them. But the admonition to love seemed to coalesce around the challenge to think of others as more important than themselves.

A Different Objective ~
It sounds like Paul was asking them to see themselves as less important than they were, but that wasn’t the objective. He was not making self-deprecation a new hallmark of holiness. God’s desire is not to make us really good at putting ourselves down. It’s to make us exceptionally good at raising others up. Clinging to last place isn’t necessarily the best way to glorify God. What glorifies Him the most is when those who have already won show others how to come in first.

To state it simply, Jesus didn’t leave Heaven and come into this sin-cursed world to prove

that He could take the lowest seat and dine among the worst. He entered the spaces occupied by the hopeless, the broken, the suffering, and those wracked by grief and loss, but He didn’t just come to visit them in their misery and then leave. He came to lift them up out of it. What He came to do was clear when He told the lame to rise up and walk, the blind to see, and the deaf to hear. He revealed who He was when He invited the hungry to a feast and the outcast to come in, but most powerfully when He called the dead to leave their tomb. He came to absorb the punishment for the worst of our crimes and the consequences for our most profound failures. He took the seat belonging to the lowest of us and equipped us for a seat at His table. 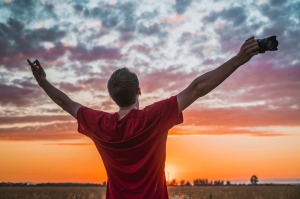 We’re surrounded these days by people gripped by a fear of losing everything. They need to hear from those who know what it is to come from last place to win it all. If Jesus has been for you all those things Paul asked about, then your victory is already won. Now, it’s time to think of others who are still struggling. and who don’t know where to turn. Paul ends the introduction to the core of his message this way:

Let this mind be in you which was also in Christ Jesus… Philippians 2:5 (NKJV)

Check out Ron’s book, “Right Side Up Thinking in an Upside Down World ~ Looking at the World through the Lens of Biblical Truth”.

10 Responses to A Time for Others