Because Sam was a prolific complainer, he was one of those guys whose personality was a constant source of temptation for that internal practical joker lurking in some of us on the night crew. He didn’t just complain; he performed. The loading dock was his stage, and his complaints were presented with award-worthy drama and pathos that added some humorous distraction to counteract the drudgery of another long night. Obviously, the more Sam had to complain about, the more fun it was for the rest of us, so being sure that he didn’t run out of new material was a priority. 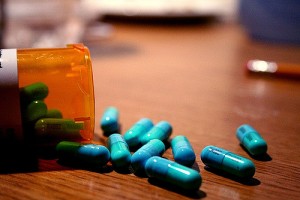 Sam’s Chemical Crutch ~
One of Sam’s recurrent complaints was that working nights was unnatural. God, according to Sam, never intended that people should sleep in the daytime and parade around all night like a bunch of hoot owls. Sam apparently never got enough sleep during the day, so he kept a bottle of an over-the-counter stimulant called ‘No-Doz’ in his locker. The pills were supposed to help him stay awake, and Sam was prone to hit the No-Doz bottle multiple times when he was having a tough night, which was a pretty frequent occurrence.

I recall that a particular night when somebody came in with another bottle of similar looking pills, except that those pills were a sleep aid designed to counteract insomnia. We thought it might be fun to replace Sam’s No-Doz pills with the ones that would help make him sleepy. To say the least, Sam did not have a good night. Before daybreak, he had thrown his No-Doz bottle in the trash can, accompanied by eloquent declarations of eternal condemnation on the makers of worthless pills and those who promote them. He capped it off with another heartfelt plea for divine judgment on the whole idea of people trying to work all night instead of being home in bed where they belonged.

A Noteworthy Reminder ~
Thankfully, there was no lingering harm done to Sam, and I have since repented of my contribution to his horrible night, but it serves as a familiar reminder. In a nutshell, it comes down to this. What Sam put in his mouth and swallowed that night were the pills in the bottle, not the words on the label that claimed to describe them. The words on the label promised him relief from his drowsiness and gave him encouragement to ingest the pills, but the words had no power to change the contents of the bottle. Once the original pills were replaced with a counterfeit, the words on the label were irrelevant — and therein lies the danger. Even in the Word of God itself, the power to affect our lives for good or evil does not reside in the words alone. The power lies in what they actually mean.

Missing the Meaning Isn’t New ~
The ‘holiness police’ on one occasion demanded to know why Jesus was having contact with repulsive tax collectors and other “sinners”. After pointing out that it is the sick who need a physician, not the ones who declare themselves to be healthy, He said, “But go and learn what this means: ‘I desire mercy and not sacrifice…’” (Matthew 9:13 NKJV). His admonition regarding these few words from the Prophet Hosea (Hosea 6:6), constituted a stinging rebuke. To the self-proclaimed authorities on the Word of God in that day, Jesus was saying that while they had the words, they were totally missing the meaning that God intended. They were replacing the content with a counterfeit and stripping away the hope that the words described. That practice continues to thrive in our culture today in both the religious and political arenas.

Our TV screens have offered us a front-row seat to a media spectacle unlike anything we’ve seen, especially since the election. The contest between our newly installed President and a blatantly oppositional media establishment provides a fresh revelation of the urgency to be in control of the ‘spin’, i.e., presenting the words in a way that affects what they mean. Whoever controls the meaning controls the impact, and that’s where the danger of media bias and distortion always lies. Jesus’ admonition to the Pharisees is appropriate for us as well. Maybe we’d better go find out what the words actually mean before we start swallowing their implications.

Bringing Definitions to Life ~
One of the important things Jesus Christ came to do was to be a living dictionary. In Him, God presented a dynamic explanation of what His words actually meant. Jesus demonstrated that righteousness was not defined by rituals, titles, restricted diets, and special clothing. He showed that compassion isn’t about just tossing a few coins in the treasury; it’s about lifting up the broken, taking in the outcast, and touching the untouchable. Sinners, to Him, were people to be redeemed, not just rejects to be ridiculed. Finally, He showed what love really means. In eternally indelible terms, He displayed the awful cost it can carry, but then unveiled its power to overcome everything that hell could hurl against it. God’s words can reside in a book, but His definitions need to live. Like the One who sent us, we’re to be living definitions of what those words mean, and help to ensure that people aren’t swallowing a counterfeit.

Author, Speaker, Bible Teacher, Humorist, Satirist, Blogger ... "Right Side Up Thinking ~ In an Upside Down World" For Ron's full bio, go to GallaghersPen.com/about/
View all posts by Ron Gallagher, Ed.S →
This entry was posted in Faith and Politics, Faith, Family, and Culture, Insights and tagged Media Bias. Bookmark the permalink.
%d bloggers like this: