Is Freedom “Just Another Word?”

In 1971, Kris Kristofferson recorded a slightly altered Janis Joplin song that had a particularly haunting line about freedom. He sang, “Freedom’s just another word for nothing left to lose; freedom ain’t worth nothin’, but it’s free.” In spite of its melancholy treatment in that song, freedom is and always will be a subject with powerful implications. 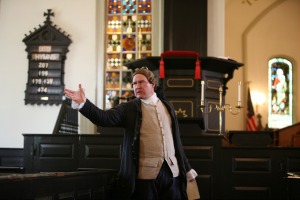 “Give me liberty, or give me death” Image by VCU CNS

This weekend we celebrate America’s declaration to the world in 1776 that from that point on, America would be free and independent of British authority. The hunger for freedom was strong in this fledgling nation, and its people were determined to assert their God-given rights, including the right of self-determination. You may recall that at that time, the King of England had an entirely different view of that announcement than we did. Somehow he missed the whole thing about it being a lofty and noble ideal worthy of banners and fireworks and stuff like that. He had some fireworks in mind, but they were of a different sort altogether. He saw our ‘Declaration of Independence’ as a declaration of war. Imagine that. One man’s liberation is another man’s provocation. Either way, freedom is a powerful idea. It can represent the most noble of causes, but it can also be misconstrued and misunderstood. Freedom is an idea that can lend itself to manipulation and seduction, and one that can be twisted so as to result in the ultimate loss of the very liberties that were sought in the first place.

Wherever you find it, freedom’s DNA is always laced with inflammatory possibilities, because it has no definition except in reference to some form of real or perceived bondage. The elements of conflict, then, are already in place when the idea of freedom begins to emerge, and the intensity of the desire for it correlates directly with the degree to which that bondage has begun to feel like bondage.

Freedom Isn’t Tangible Until it Touches Us
Janis Joplin’s lyric feels disturbing to many of us ‘freedom-loving Americans’, but is there some modicum of truth buried in it? It could be argued that freedom really is, after all, “just a… word”. Freedom isn’t a concrete ‘thing’ like a machine, or a weapon, or even a piece of technology, and neither is it a physical authority. Freedom has no arsenal that it controls, no army that it commands, and no central organization from which it projects power or delegates authority. Freedom is just a construct—just an idea, and if it remains only that, it accomplishes nothing. As an isolated term, it doesn’t rise up to challenge anything, or change anything. That kind of freedom doesn’t threaten tyrants or antagonize oppressors. When freedom is left disembodied, Kris and Janis are right. To the degree that it’s only “just another word”, it truly “ain’t worth nothin’”, and to the extent that it remains “just another word”, its cost equates to its worth, “nothin’.”

But when the idea of freedom invades the mind and heart of a human being in bondage, something remarkable happens. Freedom becomes something else, something living, something powerful, something invincible, and something that threatens oppression like nothing else can. Once firmly entrenched in a human heart, freedom will rise up in defiance of odds that are overwhelming. When the word becomes embodied in men and women, it ceases to be just a word. Freedom in that state transcends mere vocabulary and transforms those it indwells. When freedom breathes in human lungs, and beats in human hearts, the weak find new strength, despair gives way to hope, courage displaces fear, trembling cowards become valiant warriors – and no longer can it be said that “freedom ain’t worth nothin’”—but at that point, it is also no longer “free”. When freedom comes to life in men, the idea is incendiary, claiming it is reactionary, and asserting it is revolutionary.

Love of Freedom – Power to Reverse the Target of Terror
Our world is infected with oppressors who seek to enslave others, and to paralyze us with fear. Some with their bombs and bullets, and others with threats of political/social/religious repercussions for resisting their godless and intrusive regulations. What, if on this July 4th, we opened our hearts afresh to the God who alone promises freedom? Perhaps we’d see that powerful embodiment of liberty that built this nation and defended it for over 200 years re-ignited. When those who are abused come to cherish freedom like Patrick Henry did in 1776, it is the oppressors and tyrants who tremble.  When“Give me liberty, or give me death!” lives in the hearts of God’s people, it is terrorists who are terrorized.  May God help us to fan that flame again and purge this nation of the crippling bondage of cowardice and fear.

8 Responses to Is Freedom “Just Another Word?”